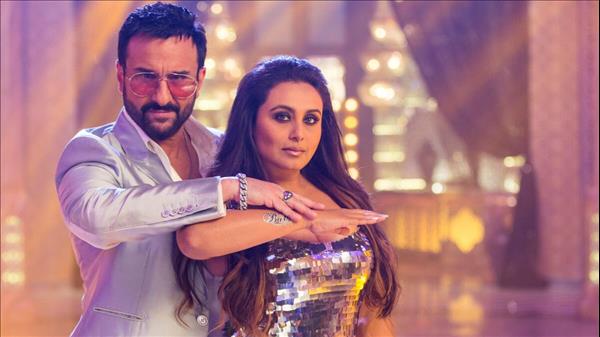 What makes a versatile Bollywood actress who has been part of memorable films across genres in her 25-year career want to come back to a quirky con-artist comedy that made a huge splash on the big screen in 2005?

16 years may be a long time, but it looks like Rani Mukerji never really let go of ‘Babli’ – the fashionable small town girl turned con artist who with her counterpart Bunty goes on some infamous adventures of fraud and cop-dodging. Fans at the time called Bunty Aur Babli an all-round blockbuster that had great songs, a sparkling lead pair and some cracking comedy.

2021 will see the rise of Babli and a new Bunty – the brilliant Saif Ali Khan, who steps into the role originally played by Abhishek Bachchan. Bunty Aur Babli 2, directed by Varun V. Sharma and produced by Yash Raj Films, also stars Siddhant Chaturvedi (Gully Boy) and debutante Sharvari Wagh as a set of tech-savvy young con artists who pilfer Bunty-Babli’s trademark, prompting the original pair who are now leading a ‘retired’ family life as Vimmy and Rakesh Trivedi in UP’s Fursatganj, to spring back into action.

Are we excited to see Rani tap into her comic talents once more and make a comeback as the feisty Babli? You bet. And it seems she is too. In a Zoom chat with City Times, the Kuch Kuch Hota Hai star commented that she wanted to do Bunty Aur Babli 2 because it helps her“bring out the fun side” of herself as an actress.

The trailer which also features the immensely talented Pankaj Tripathi (who plays a ‘super cop’) and veteran comedian Asrani, had us in splits, with Saif and Rani effortlessly creating sparkling chemistry as they’ve often done on screen earlier.

We asked Rani what is new about Babli this time around and what fans can expect from her.

“I think she is the fashion diva from Fursatganj, and she’s taken her fashion to the next level in her own way. She’s all heart but she’s also very real and at the same time she’s super fun. And she hasn’t left her fun side behind even though the screenplay showcases the couple as going through a midlife crisis, but when you see Vimmy’s character you will never believe that she could be in any sort of crisis.”

‘Saif has done a fabulous job’

Rani and Saif are a much loved on-screen pair in Bollywood and have appeared in quite a few films together like Hum Tum, Ta Rum Pum Pum and Thoda Pyaar Thoda Magic. How did she feel about teaming up with him again for Bunty Aur Babli 2? And how did he adapt to becoming Bunty?

“It was actually wonderful, you know, because Saif and me have over the years really honed our craft with each passing film of ours and we have this wonderful respect and love for each other, and for each other’s craft.”

She called Bunty Aur Babli 2“a very special project” for both of them.

“Saif has worked doubly hard to make himself Rakesh Trivedi/Bunty, and I think he has done a fabulous job. On the first day of the shoot, he completely sold me! He caught me hook, line and sinker with his work.”

The Black actress also spoke about how a sense of competition doesn’t get in the way of her and Saif’s professional relationship, which makes working with him a breeze.

“I think that because we really love each other and we enjoy each other’s work, our work relationship is even better. So when I perform scenes with him there is that sort of comfort and security that we have with each other, where both of us are not competing with each other but are just trying to make ourselves better. That’s the kind of chemistry we share, that we work as a team, and I think that came across beautifully (on screen). When you see the film you’ll know how well we worked as a team.”

You May Also Like  'Chatted merrily' with Shuai at a skiing event last month: Yao Ming

Made for the big screen

Bunty Aur Babli 2 is heading for a big screen release this weekend in the UAE, unlike many other big-budget films which had to go the OTT way because of the pandemic and cinemas being shut.

Rani revealed that Aditya Chopra, her husband and producer of the film, held on to his conviction about releasing films only in cinemas despite the obstacles that cropped up during Covid-19 lockdowns.

“This is something that my husband stood for, for the last two years, and he did not give any of his films to OTT because he feels cinemas and our films are supposed to be for the big screen spectacle. So I think it’s his belief in his product and the fact that he believes that audiences just enjoy watching a film on the big screen. And I hope that all our hard work and all our patience and perseverance and Adi’s faith in the film is kind of multiplied with the love that we get from the audience.”

Rani on 25 years in the industry

We asked the Chalte Chalte actress who kicked off her Bollywood career with the social drama Raja Ki Aayegi Baraat and first found commercial success with Ghulam and Kuch Kuch Hota Hai, if filmmaking has evolved over the years when it comes to female characters and women-centric films.

“I came in (to Bollywood) at the end of the 90s. And I was just starting off at that point of time, so I am actually kind of a 2000s artist in that sense, you know? Because that’s when I did the majority of my work. So I wouldn’t be able to say much about how much it (the industry) has changed. The kind of films I did gave a lot of importance to women per se. And right from my first film whether it was Raja Ki Aayegi Baraat to now, I’ve always portrayed strong roles. So in my career graph I’ve always picked up those roles which would portray Indian women in a very different light.”

‘Please call me to the UAE’

When asked about her equation with the UAE, the actress who was last in Dubai to promote Mardaani 2 in December 2019, joked,“I would like to say, please call me, I want to come for the release of Bunty Aur Babli 2! That’s my connect, I am really wanting to come! Nobody’s taking me there. I am wanting to come and show the film to you guys. Call me!”

Rani had also come down to Abu Dhabi prior to the onset of the pandemic, to shoot a heist/con-artist showdown scene at Emirates Palace hotel.

“It was just amazing, I would have to say Abu Dhabi has given the kind of grandeur that we were looking for in the second half of Bunty Aur Babli 2. In one second, it (the action) just shifts from Fursatganj, UP, to Abu Dhabi and there is so much luxury and grandness! So it’s a great shift and it looks beautiful on screen. The hospitality was fantastic and we had an amazing time shooting there because all the scenes which were to be shot at Abu Dhabi were just hilarious. You guys will know when you see the film.”