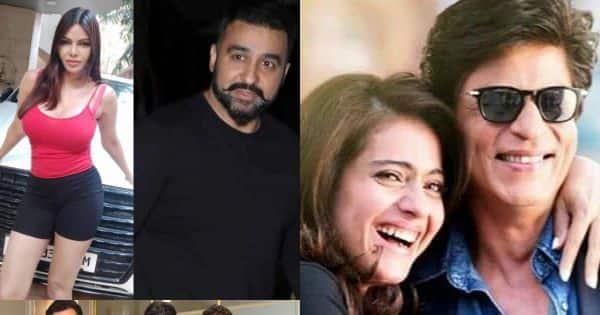 As the end credits of another day roll by, it’s time to look back at the biggest newsmakers from Bollywood who’ve made it to the trending entertainment news today. From Shah Rukh Khan and Kajol reuniting and Sherlyn Chopra accusing Raj Kundra of sexual assault to Aditya Roy Kapur in the Thadam remake, Shilpa Shetty’s mother filing a police complaint and Kareena Kapoor’s pregnancy bingo – here’s all what grabbed headlines in Bollywood to make it to the trending entertainment news today… Also Read – BREAKING! Aditya Roy Kapur to play his first double role in the Bollywood remake of Arun Vijay’s Tamil hit, Thadam – deets inside

So, without further ado, here are the entertainment newsmakers of 29th July 2021:

Shah Rukh Khan and Kajol are considered as one of the most iconic pairs of the silver screen and their long-awaited reunion may finally be on the cards as latest reports suggest that the duo will star together in Rajkumar Hirani’s next movie, which will narrate the story of an Indian family and their struggle with immigration. The film is expected to be a trademark Hirani venture with large doses of emotions mixed with laughter. Also Read – #BLRecommends – Miss travel? Here’s an OTT watch list starring Hrithik Roshan, Kangana Ranaut, Deepika Padukone and more to satiate your wanderlust

Read the full story here: SAY WHAT! The iconic pair of Shah Rukh Khan and Kajol to return on the silver screen for THIS film? Also Read – Did you know: Sanjay Dutt’s drunken fan-boy moment scared Sridevi so much that she refused to work with him?

Raj Kundra, who is currently in jail for his alleged connection in a pornography-related case, has more trouble mounting for him after he has been accused of sexual assault by former Playboy playmate, Sherlyn Chopra, who has also filed an FIR against him.

You May Also Like  My daughter's presence has changed me a lot: Jassie Gill

Read the full story here: Shocking! Sherlyn Chopra accuses Raj Kundra of sexual assault; ‘He kissed me even though I resisted’

Based on true events, this yet to be titled thriller will see Aditya Roy Kapur in a double role for the very first time, portraying two completely different avatars. Helmed by debutant director Vardhan Ketkar, the film will be produced by Bhushan Kumar’s T-Series and Murad Khetani’s Cine1 Studios.

There seems to be no end to the mounting troubles for Shilpa Shetty and her family as now, her mother, Sunanda, has filed a cheating complaint against a man named Sudhakar Ghare who sold her land worth Rs 1.6 crore with fake papers.

Kareena Kapoor Khan conducted a fun pregnancy bingo session on her Instagram handle recently. And the Bingo listicle is so hilarious and relatable that all the mommies and expectant mothers are playing the game.