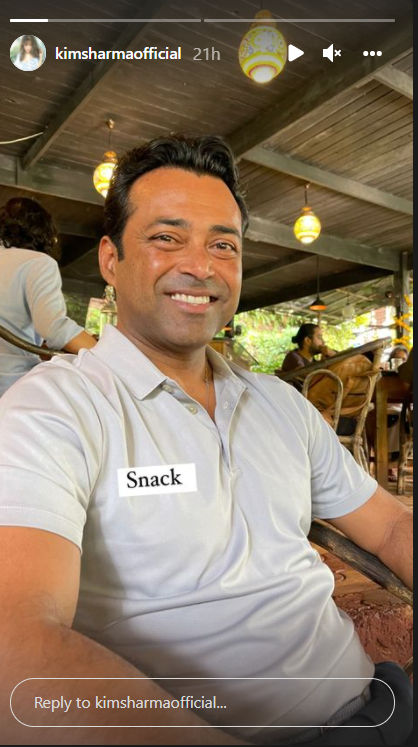 Mohabbatein fame actor Kim Sharma who made her relationship official with sportsperson Leander Paes in September this year has been shelling out couple goals. Recently, she shared two pictures on her Instagram stories with Leander from their visit to a restaurant in the city.

From getting caught at various eateries to enjoying their evening walks, the two stars are often seen spending quality time together. Recently, Kim posted a picture from their latest outing at a café. In the picture, she can be seen sporting a white shirt with pink stripes on it, while Leander is seen sporting a white t-shirt. They can be seen looking at each other in admiration and smiling while posing. Kim and Leander can also be seen holding their hands and it is all things love.

Kim Sharma-Leander Paes look beautiful in this pic together

Apart from this, she even shared a solo picture of the Olympic winner and called him her “snack.’ Meanwhile, the two previously extended their heartfelt Diwali wishes with a love-decked picture. Dressed in their stunning ethnic attires, Kim was seen holding Leander’s hand while posing with her pet dog to wish fans on the auspicious occasion of Diwali. “Happy Diwali from us to you. I hope you’re happy healthy always. Love and light (sic),” she wrote. 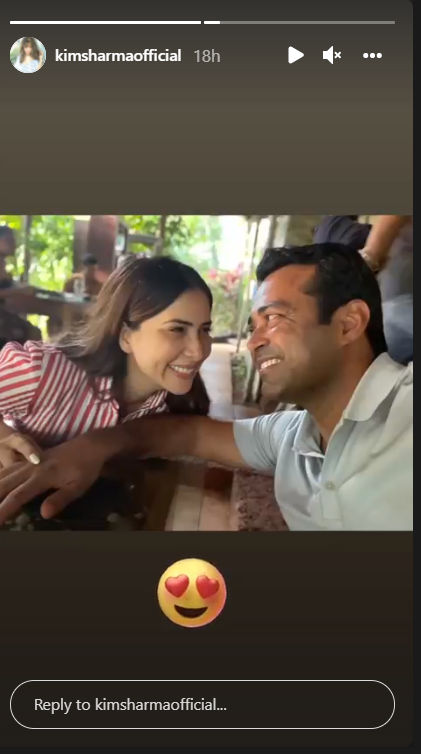 The rumours about their relationship had been long surfacing on social media and the actor had later put all the speculations to rest with a picture earlier. In September, Kim took to Instagram to share a picture with Leander. The former tennis player is lovingly looking at her while Kim is smiling at the camera. For the caption, the 41-year-old actress dropped an evil eye and girl heart boy emoji. Post that, this is their second picture together where the two are wishing all on their behalf.

Kim Sharma and Leander Paes were spotted vacationing in Goa earlier this year. While the couple did not post any picture on their social media handles, a Goa restaurant shared a few snaps from Kim and Leander’s vacation. In the photos, they were seen twinning in white. Kim Sharma wore a white coloured shirt on denim shorts, while Paes donned a white t-shirt on checked shorts.

Get the latest entertainment news from India & around the world. Now follow your favourite television celebs and telly updates. Republic World is your one-stop destination for trending Bollywood news. Tune in today to stay updated with all the latest news and headlines from the world of entertainment.