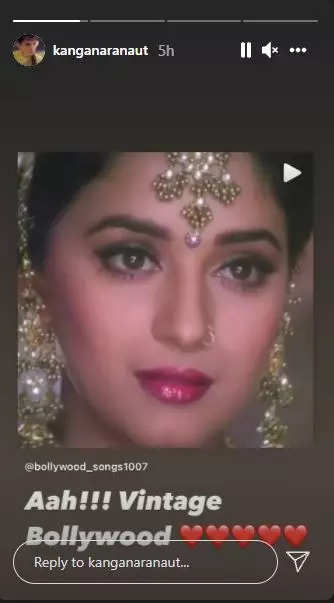 Actress Kangana Ranaut, who is an avid social media user, took to Instagram on Wednesday afternoon and shared a video from Salman Khan and Madhuri Dixit’s hit film ‘Hum Aapke Hain Koun’. She reposted a video from a fan club that featured the song ‘Didi Tera Devar’ from the film.

Sharing the video on her Instagram Stories, Kangana wrote, “Aah! Vintage Bollywood,” and added multiple heart emojis. Salman and Madhuri’s film was highly appreciated by the fans back then. It is still considered to be a cult classic. The film was directed by Sooraj Bharjatya and it also starred Mohnish Bahl and Renuka Shahane in important roles. Have a look:

Meanwhile, Kangana recently spoke about Shah Rukh Khan and Aryan Khan’s controversy. The star kid is currently in judicial custody as he was arrested by the NCB on October 3. The agency raided a luxurious ship in Mumbai and busted a drug party. Along with Aryan, seven others were nabbed by the officers.

After Hrithik Roshan penned a long inspiring note for Aryan, the actress was quick to react to the same. She had written, “Now all Mafia Pappu coming to Aaryan Khan’s defence… We make mistakes but we mustn’t glorify them… I trust this will give him perspective and also make him realise the consequences of his actions… Hopefully, it can evolve him and make him better and bigger. It’s good not to gossip about someone when they are vulnerable but it’s criminal to make them feel that they did no wrong.”

You May Also Like  Anushka Sharma Shares A Happy Picture With Daughter, Vamika From Their 'Ashtami' Celebrations

In his open letter to Aryan, Hrithik had written, “My dear Aryan. Life is a strange ride. It’s great because it’s uncertain. It’s great cause it throws you curveballs, but God is kind. He gives only the toughest ones the toughest balls to play. You know you are chosen when amidst the chaos you can feel the pressure to hold your own. And I know you must feel it now. The anger, the confusion, the helplessness. Aaah, the very ingredients that are needed to burn the hero out from inside you. But be wary, those same ingredients could burn away the good stuff… the kindness, the compassion, the love. Allow yourself to burn, but just enough.”