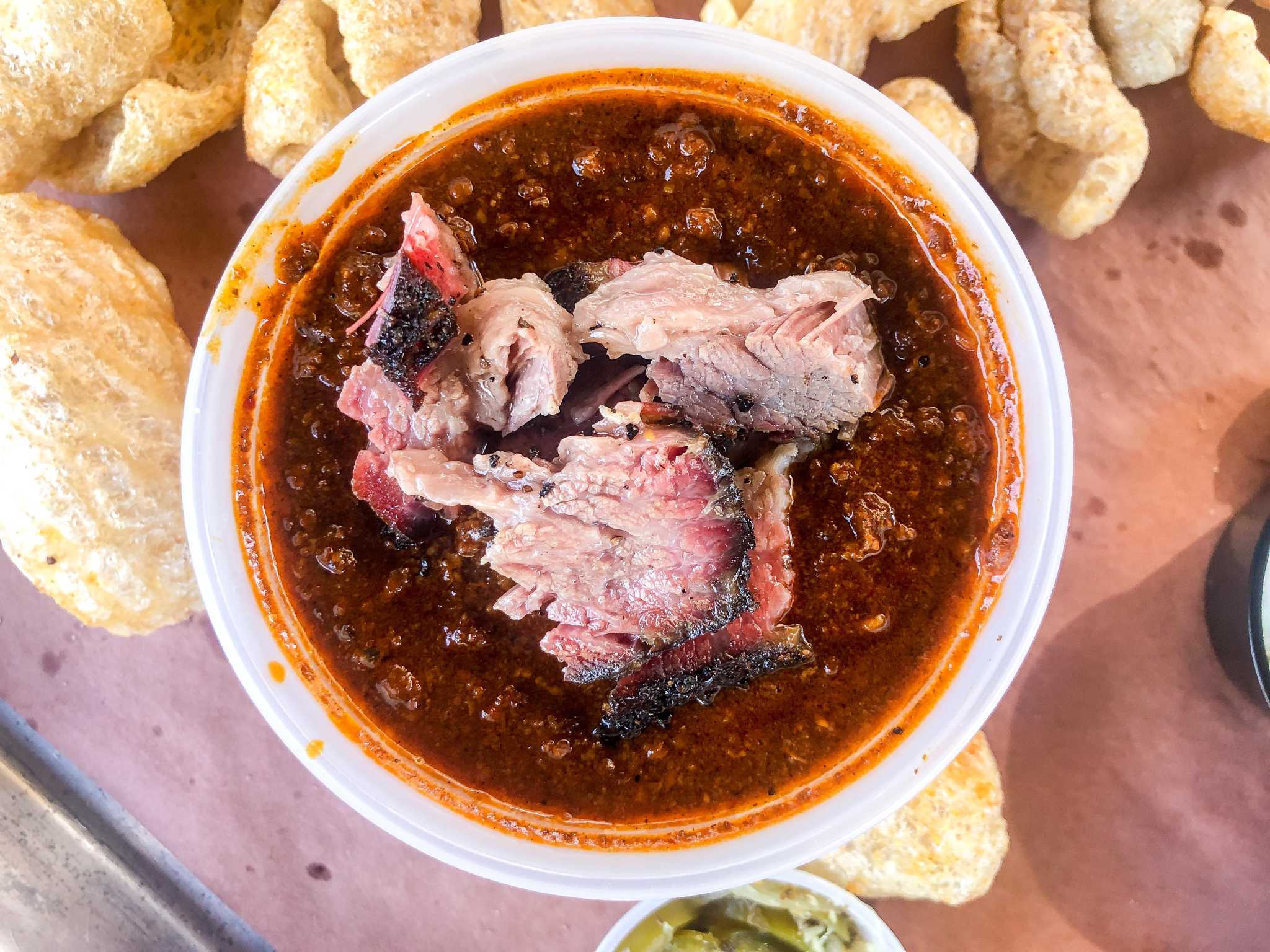 The cooler weather ushers in one of my favorite special dishes in Texas barbecue: chili.

There are many types of chili. There’s the fancy chili made by talking heads on food television featuring chunky cubes of ribeye steak, tomatoes and maybe even a handful of cringe-inducing beans.

There are turkey and chicken varieties of chili (Jason’s Deli has a pretty good chicken version). There’s a soupy Cincinnati-style chili redolent of cinnamon and allspice and served with spaghetti (James Coney Island is the closest you can get here, minus the spaghetti). There’s even a vegan chili with tofu and even more beans (I have no idea where to get this).

But for Texans, there’s really only one style of chili that bubbles away on our stove top from the day we are born to the day we’re no longer around to eat chili. That would be Texas red chili.

I wish I could tell you I have a family recipe for Texas red that includes dozens of ingredients and takes a full day to prepare, passed down for generations on stained and crumbling notecards.

I do not. On the contrary, like many Texans who grew up with a pot of Texas red on the stove, the recipe comes out of a box, acquired at a supermarket, with one of two names on the front — Wick Fowler or Carroll Shelby.

These two brands of chili-kits-in-a-box include packets of spices (paprika being the one that gives it the red tint) that are combined with ground beef, tomato sauce and water. We were always a Wick Fowler family. Still are.

A few decades of making Texas red has yielded insights on how to make box chili the best it can be.

Let’s start with the ground beef. Box recipes will often call for an “80-20” grind of ground beef (80% beef, 20% fat). It then instructs you to drain off most or all of the fat after browning. I’m not a fan of draining fat off anything, as that is where most of the flavor is.

So I’ll actually use a “90-10” slightly leaner grind. It produces just enough fat so no draining is needed, developing a rich flavor with that shiny, thin sheen of flavorful fat floating on the top of the finished product.

You May Also Like  How To Make the Most Money With Your Free Time, According To Experts

Also, both brands include a “masa” packet of earthy flour you can stir in at the end of cooking. Its raison d’être is as a thickening agent and to add some counterpoint to the acidity of the tomatoes, richness of the meat and pungency of the spices. I personally find that the masa flour muddles the flavors of the other ingredients, so I leave it out. If you want thicker chili, just cook it a half-hour longer.

Accouterments should be basic. To make it a meal, I’ll ladle the chili over a small amount of white rice and drop on some fresh, crunchy chopped onions.

Of course, if you’ve made a full pot of Texas red, you’ll have plenty left over. I separate the remaining chili into single-serving Tupperware containers, put one in the refrigerator for lunch the next day, and the others in the freezer for future chili meals. And although I have no scientific basis for this assertion, I’d say the chili is even better the next day after marinating overnight in the refrigerator.

Those single-servings of frozen chili are also great for barbecue leftovers. If I find myself with leftover brisket from a trip to my favorite neighborhood barbecue joint, I’ll warm up the chili and brisket (separately) in the microwave, chop up the brisket, and stir it into the chili. It’s a meal unto itself.

But if you open the freezer and realize you finished off the last of the chili, no need to panic. Head over to a local barbecue joint like The Pit Room in Montrose, where they make real-deal, scratch-made Texas red from multiple fresh ingredients in a day-long process. I’ll order a bowl and a side of crispy chicharrones (pork rinds) for dipping, and a quarter-pound of moist brisket that I’ll pull apart and add to the chili.

Lunch doesn’t get much better on a crisp, cold winter’s day.

This amazing article on “It’s Texas red chili weather. How to make this meal from a box taste amazing” was originally found here