NEW DELHI: The Indian men’s badminton team pulled off a major upset on Sunday by crushing 14-time champions Indonesia 3-0 in the final to win their maiden Thomas Cup title.
With the unprecedented win, India added another chapter to its biggest badminton moments. Here’s a look at some of the other biggest and historic achievements of the Indian badminton players.
Prakash Padukone (All England Open title in 1980)

One of the biggest Indian badminton legends, Prakash Padukone created history at just 24 years of age, when he became the first Indian ever to win the All England Open at Wembley Stadium on March 23, 1980.
The feat was special in many ways as it was the country’s biggest taste of success at the grandest stage. Prakash, who was at his prime at that time, went on to win the championship without dropping a single game.
In the final, Prakash defeated Indonesia’s Liem Swie King 15-3, 15-10.
Pullela Gopichand (All England Open title in 2001)

Another legend of the Indian badminton ecosystem, Pullela Gopichand was the second Indian after Prakash Padukone to clinch the All England Open Badminton Championships in 2001.
In the final played on 11th March 2001, Gopichand defeated Chen Hong of China 15-12, 15-6 to give India its second biggest badminton moment.
Saina Nehwal (Olympics bronze in 2012)

Former world No.1 Saina Nehwal gave India its first taste of badminton success at the Olympics when she won the bronze medal at the 2012 London Olympics.
The singles bronze made Saina the first Indian woman to clinch an Olympic medal in badminton.
Saina grabbed the bronze in her second Olympic appearance as her journey in 2008 Beijing Games ended in the quarters.
PV Sindhu (Olympics silver and bronze medals in 2016 and 2021)

The pride of India, Pusarla Venkata Sindhu is probably one of the biggest names going around in the badminton circuit at the moment.
The first Indian woman to claim two Olympic medals, Sindhu in 2021 added a second medal — bronze in Tokyo after bagging a silver in Rio 2016 Games.
To go with that, Sindhu also has a World Championship title to her name, which she won in 2019 as she became the first Indian woman to achieve the feat.
Kidambi Srikanth (Four Super Series titles in a calendar year and World No.1 ranking)

Kidambi Srikanth had a stellar run in 2017 when he became the first Indian to win four Super Series titles in a calendar year.
Prior to him, only four male shuttlers in history had achieved the feat of clinching 4 Super Series titles in a year.
The sensational run in 2017 helped Srikanth become the second Indian men’s player after Prakash Padukone to be ranked World No.1.
On 12 April 2018, Srikanth grabbed the top spot in men’s singles ranking, bringing enormous joy to the country.
Kidambi Srikanth’s silver and Lakshya Sen‘s bronze at World Championships

In December 2021, Kidambi Srikanth made history as he became the first Indian shuttler to win a silver medal in the men’s singles at the World Championships.
In the final against Singapore’s Loh Kean Yew, Srikanth lost 15-21, 20-22.
Youngster Lakshya Sen in the same tournament also became the youngest-ever Indian male shuttler to win a medal at the Worlds. The 20-year-old settled for a bronze.
India stun Indonesia 3-0 to win maiden Thomas Cup

India’s men’s badminton team on Sunday lifted their first-ever Thomas Cup title with a commanding 3-0 win over powerhouse Indonesia.
20-year-old Lakshya Sen set the tone in the finals for India when he stunned Olympic bronze medallist Anthony Sinisuka Ginting. Satwiksairaj Rankireddy then combined with Chirag Shetty for a similar come-from-behind win over Mohammad Ahsan and Kevin Sanjaya Sukamuljo in the doubles.
After going 2-0 up, Kidambi Srikanth defeated Jonatan Christie 21-15, 23-21 in the second singles as India became only the sixth nation to win the coveted trophy. 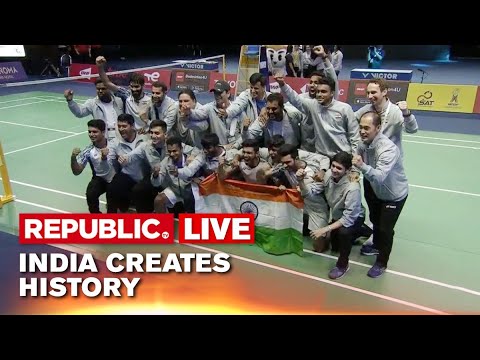