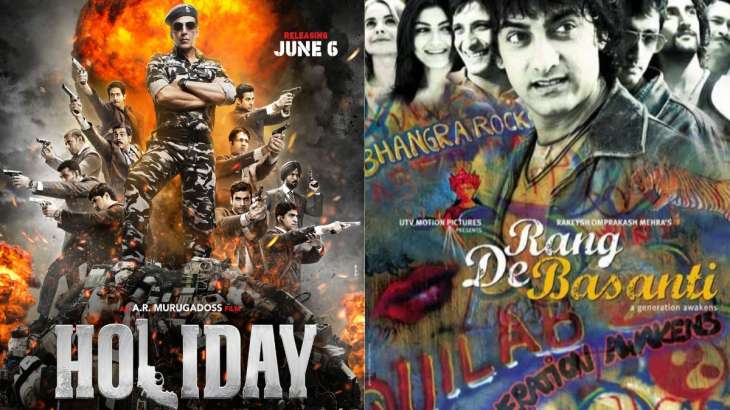 Independence Day 2022: Over the years, Bollywood has produced a number of films that deal with patriotism. There are movies you watch and then quickly forget, and then there are movies that induce you to feel patriotic and fill your heart with pride. This year, India commemorates 75 years of freedom, and as citizens, we could not be more proud. Here is a list of patriotic movies that are absolutely unmissable.

Holiday: A soldier is never off duty

The 2014 release starred Akshay Kumar in the lead role alongside Sonakshi Sinha. The movie centers on an Indian Army officer who goes to Mumbai and decides to track down and eliminate the terrorist mastermind behind a network of sleeper cells. The film was a box office success both in India and overseas.

The Shah Rukh Khan starrer follows the story of a coach who has a negative reputation for betraying his nation. To prove his devotion to his nation, he starts mentoring the Indian women’s national hockey team. His ultimate ambition becomes to overcome all challenges and lead his nation to victory in the hockey tournament.

The Rakeysh Omprakash Mehra directorial stars an ensemble star cast of Aamir Khan, Siddharth, R. Madhavan, Atul Kulkarni, Soha Ali Khan, Sharman Joshi, Kunal Kapoor, and British actress Alice Patten. The film centres on a British film student who visits India to document the lives of five Indian revolutionary independence warriors. She makes friends with five young guys and involves them in the movie, which motivates them to fight against the corruption in their own government. The film awakens the feeling of patriotism and is one of the best films in Indian cinema.

Based in the British era, the classic film stars Aamir Khan in the lead role. The movie centres on the residents of a village in Central India who, as a consequence of high taxes and a prolonged drought, take a British Indian Army officer’s challenge to play cricket in order to evade paying taxes. Lagaan is one of the most remarkable films in Indian cinema.

The Siddharth Malhotra starrer is based on the heroic life of Capt. Vikram Batra, who sacrificed his life in the Kargil War. The film also starred Kiara Advani and was helmed by Vishnuvardhan. The film was a box office success, and it gives viewers shivers as it incites patriotism.

In a first, Made-in-India ATAGS howitzer to be part of 21-Gun salute during Independence Day celebrations

Tricolour reflects pride of India’s past, commitment of present and dreams of future: PM Modi

This amazing article on “Independence Day 2022: Bollywood films that will undoubtedly spark your patriotism” was originally found here