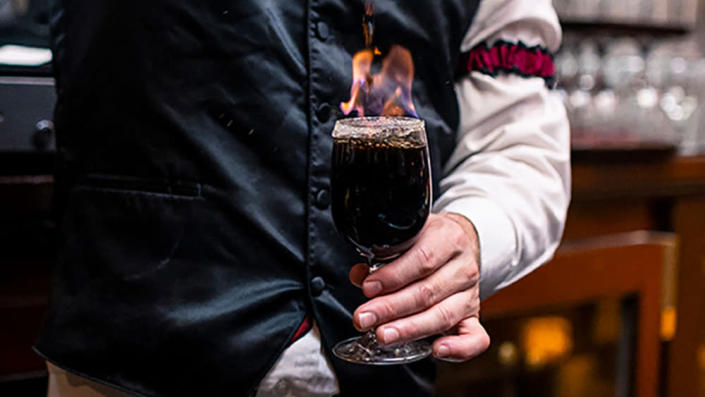 The Spanish Coffee is a peculiar drink, in that the farther you get from Spain—geographically, culturally and from anything you might actually be served in that country—the more interesting and specific the cocktail becomes. It’s like a game of telephone, where you start with “hippopotamus” and by the end you have a perfect English sonnet.

Order a boozy coffee in Spain, and you’ll get what they refer to as a Carajillo, just espresso and a spirit, either rum or brandy. Order one in Mexico, and you’ll also get something called a Carajillo, but Mexico has its own charming, desserty version: That same espresso, this time with a sweet vanilla-forward liqueur called Licor 43. Order one in Portland, Ore., however, and you’ll get literally none of those things. What you’ll get instead is a “Spanish Coffee.”

In downtown Portland, a couple blocks west of the Morrison Bridge is Huber’s, which sits on 3rd Avenue, as it has since 1910. Huber’s is a restaurant, the oldest in the city in fact, but it would also be correct to call Huber’s something of a show. This is not because the staff uniform—wing-collared dress shirts, vests, red ties and occasionally sleeve garters, which manage (miraculously) to not look the least bit costumed amid the restaurant’s mahogany and stained glass—but rather that for the last 50 years, Huber’s has served, flamboyantly and with great aplomb, a flaming mixture of brewed coffee, triple sec, Kahlua and blisteringly high-proof rum that they call a Spanish Coffee.

The history of the drink is murky, unsatisfying and ultimately irrelevant: In the 1970s, owner James Louie was inspired by a boozy coffee drink of same name at a nearby restaurant, now long closed, which reportedly themselves inspired by the Mexican Carajillo, which was itself inspired by the Spanish one (that game of telephone). What is relevant is what Louie did when he brought it back to Huber’s, creating, ostensibly out of nowhere, the spectacle for which they’ve become famous.

Order a Spanish Coffee, and it’ll go like this: First, your bartender will coat the rim of a glass in sugar, and begin by pouring in triple sec and 151-proof rum in big cascading arcs, twisting while pulling the bottle away from the glass until the stream of liquid is 3-4 feet long. Despite the acrobatics, not a drop of this liquid will hit the floor. The bartender will then do a neat little trick where he (I went deep on YouTube—they all seem to be men) using only one hand separates and then lights a single match from a matchbook, and ignites the high proof rum, encouraging the blue flames by twisting and swirling the glass for about a minute, thereby caramelizing the sugar rim. He’ll then add a few more long beams of Kahlua and top with hot coffee and then smother the fire with cold semi-whipped cream, which layers on top like a blanket. I suspect they hire straight from juggling teams or perhaps the circus. It’s sincerely impressive.

In the end, the biggest surprise is how good the Spanish Coffee tastes. It’s like getting a phenomenal meal on an airplane, a bonus you weren’t expecting. It’s balanced, warm, strong and rich, the kind of drink more or less perfect for the interminable dreariness of America’s Weirdest City, or for the rest of us currently in the dead of winter.

“But why,” you may be insisting, “is a combination of Caribbean rum, Mexican liqueur and Dutch triple sec called a Spanish Coffee?” No one knows. It doesn’t matter. Now quiet down, you’re missing the show.

Moisten the rim of a glass with a citrus wedge or some water and dip it into a bowl of sugar, to coat the top half-inch or so of the glass with sugar. Add rum and ignite (make sure your glass is tempered and can handle the heat). Let it burn for 60 to 90 seconds, while angling and turning the glass to caramelize the sugar (it helps to see it done). Once sugar is dark and candied, add coffee liqueur and hot coffee, and then top with cream. Garnish with a pinch of cinnamon.

Proportions: The proportions above are almost exactly what Huber’s themselves will tell you, and are sensible. However. Order a Spanish Coffee at Huber’s (or, again, watch videos on YouTube) and tell me if you think they’re only pouring 1 oz. of 151 in your glass. Or less than 2 oz. of Kahlua. The measurements that you will receive at Huber’s are utterly unmoored from any kind of recipe they’ll describe. Pouring a long showy stream of liquid doesn’t lend itself to precision. At Huber’s, this is an incredibly strong drink, but still a delicious one. There’s a lot of room for error.

You May Also Like  How To Make Your Home Look More Expensive For Cheap, According To Designers

Rum: Huber’s uses 151-proof rum, but they don’t seem particular on the brand. Videos show both Bacardi 151 and Cruzan 151. When I was there in October, it was Cane Run 151. If shopping for 151, just use whatever you can find.

It needs to be high proof to ignite, but strictly speaking doesn’t need to be 151. My favorite rum that I tested for this is just a bit shy of that, the Plantation O.F.T.D (Old Fashioned Traditional Dark, or “Oh Fuck That’s Delicious,” depending on who you ask) a 138-proof rum that burns and sizzles just as well as 151 and adds a depth that was much welcome.

Triple Sec: You need orange liqueur here. It tastes good without it, but as much as anything, this is what makes it a Spanish Coffee. Without the orange, it can get confused for its Irish cousins. The orange it what makes it itself.

In the divide between triple sec (vodka based) and curacao (brandy based), go triple sec. My perennial recommendation is to use Cointreau or Combier—expensive for a mixer, yes, but it’s the best. It is, however, less important in this drink than it is in others like the Cosmopolitan, say, where it is vital. Huber’s uses the 42-proof bottling of Bols Triple Sec, which works very well for them. I would simply urge you to note, here and elsewhere, that a cocktail is only as good as its weakest ingredient, so a crusty old bottom shelf liqueur can and will ruin your whole drink.

Coffee Liqueur: Huber’s uses Kahlua, and you should too. For general applications, I don’t believe Kahlua is as good as its competitors. This drink is different—the coffee liqueur doesn’t need to be quite so rich and roasty when it’s shoulder to shoulder with a full 3 oz. coffee in the drink itself. I tried Borghetti and Tia Maria and all the third-wave hipster coffee liqueurs in side-by-side tests, and none were as good as Kahlua. Color me surprised.

Cream: Just like with the incredible Irish Coffee, the cream is the real genius move here. A cold layer of cream over the drink tempers the alcohol and reduces the need for precision with either sweetness or proof. You want to semi-whip it, either with a whisk, or else put it in a jar and shake it for 30 to 60 seconds, until the volume increases by 50 percent or so. That way it gets light enough to thicken but still be pourable, and layer on top.

Garnish: Huber’s uses pre-ground nutmeg, which is fine. Mixologicaly speaking, fresh-ground nutmeg is a must, but as it turns out, this particular drink doesn’t benefit much from fresh nutmeg’s peculiar intensity. For me, a pinch of powdered cinnamon is a better aromatic fit for the orange and coffee. You could also not garnish it at all. It doesn’t matter that much.

The Show: One of the theories for the origin of the name is Spanish cider tradition of the long “escanciado” pour. Is it important that you pour across your entire body? Of course not. And unless you have a lot of practice or a lot of spare booze, I don’t recommend it.

Is it important that you light it on fire? No, for two reasons: 1) Torched alcohol does taste different, but once it’s dressed with orange and Kahlua and coffee and cream, you can’t really tell, and 2) setting the 151 on fire for 60 seconds doesn’t reduce the alcohol as much as you think it does. It warms the glass and the liquid mixture, both important, but only reduces proof from 151 to about 142, which doesn’t really matter (you’d need to keep it burning for three to four minutes to get one ounce of 151 down to 50 percent alcohol). The fire is just to caramelize the sugar rim, and to put on a show, and while both are wonderful, neither is crucial to a delicious drink. Feel free to omit the sugar rim and the fire, and the Spanish Coffee is still worth your time.

Every week bartender Jason O’Bryan mixes his up his favorite drinks for you. Check out his past cocktail recipes.

This amazing article on “How to Make a Spanish Coffee, the Flaming Coffee-Rum Cocktail That Originated in Portland” was originally found here