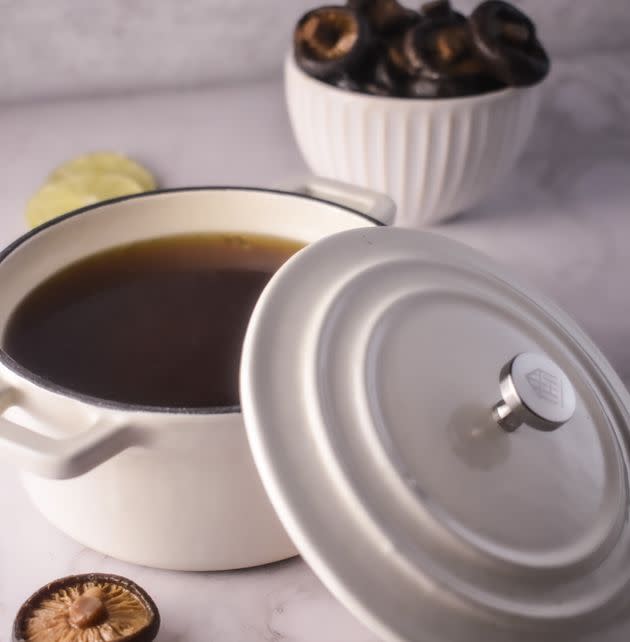 A wellness trend that’s played a major role in the food world for the past several years, bone broth can be found on restaurant and cafe menus, supermarket shelves and even as the focus of home-delivery concepts. This elixir, which offers both health benefits and rich flavors, can be made by boiling animal bones and connective tissues with herbs, vegetables and other ingredients, then straining away the solids and preserving the liquid. As the drink’s name suggests, classic “bone broth” relies on animal products — but is it possible to reap the advantages of this sippable, nutrient-loaded food if you’re committed to plant-based eating?

Chef and recipe developer Kaitlin Magno of Phok Meat assures us that a plant-based “bone broth” is very achievable. “I have a ‘no bone broth’ recipe that focuses on plant extracts, herbs and vegetables,” Magno said. She agreed to share her recipe with HuffPost below, along with some useful guidance on making the best version of vegan-friendly “bone broth.”

Why is bone broth so appealing to consumers?

The sudden ubiquity of bone broth (which began a few years ago and hasn’t shown any signs of slowing down) might seem a bit puzzling to those who aren’t super familiar with food trends. According to Magno, the rise of bone broth hinged on “the fact that it’s packed with collagen, and most people associate that with good hair, skin and nails.” Magno also says that bone broth proponents laud this liquid as “high-protein, low-carb, nutrient-packed and a healer of the gut, joints and any inflammation.”

So does meat-based bone broth actually live up to all of the hype? While the broth does contain collagen and plenty of vitamins and minerals (and while it certainly is low in carbs and high in protein), Steven Gundry, a heart surgeon and pioneer in nutrition, previously explained to HuffPost that collagen actually cannot be absorbed as collagen after you ingest it. So drinking a collagen-rich beverage to help your hair, skin and nails doesn’t do you much good.

Magno warns against buying into the idea of bone broth as a “miracle cure.” “People are always looking for the next new superfood, magical food cure-all or special diet to optimize their health,” she said. “People almost look at bone broth as this ‘fountain of youth.’” However, she explains that “there is very little scientifically based research” behind the push to market bone broth as anything more powerful than a healthy supplement to a balanced lifestyle regimen. The bottom line is that bone broth has a lot of nutritious elements, but it isn’t a magical potion, so it’s crucial to manage your expectations.

How can a plant-based ‘bone’ broth provide the same benefits as a typical bone broth?

Magno tells us that plant-based bone broth (particularly the formula that she shares below) can indeed facilitate collagen production and deliver as many nutrients as its animal-based equivalent. “Vitamin C, polysaccharides, silica, zinc, copper and amino acids all work as a team to produce collagen in your body. In my ‘bone’ broth, I made sure to include all the building blocks to help you produce collagen,” she said.

For a more granular scientific breakdown, Magno gave us the following info: “Lemon and carrots [provide] vitamin C. Seaweed contains polysaccharides. The shiitake mushrooms contain zinc and copper. Daikon radish contains high concentrations of silica. The nutritional yeast adds B12, which is essential in vegan diets and also is a complete protein. Because it is a complete protein, it provides 18 amino acids.”

How can you make it taste good?

If you’re concerned that a plant-based “bone broth” won’t offer the same depth of flavor and unctuous texture as an animal bone broth, you’ll be glad to know that Magno hears your worries. “Because vegan broths are made with pure vegetables, the broth usually comes out tasting less complex. The consistency tends to be thinner, as well. The thicker consistency of bone broth comes from the gelatin that is extracted by boiling the bones and connective tissues. Besides gelatin, collagen also comes from the bones and tissue.”

While Magno acknowledges that collagen itself is not a vegan product and can’t be made for consumption using only plant-based ingredients, she says she “crafted this broth with specific ingredients that boost collagen production” in the human body. As far as the broth’s texture goes, Magno adds nutritional yeast and agar agar powder, which comes from red algae and acts like gelatin. These ingredients help to bring body and thickness to the broth.

If you’d like to give Magno’s robust and fortifying plant-based “bone broth” a try, here’s her recipe.

The broth can be stored in an airtight container for 3-4 days in the fridge or up to 6 months in a freezer-safe container.

This article originally appeared on HuffPost and has been updated. 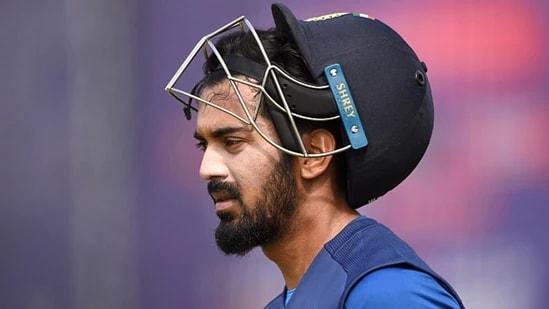