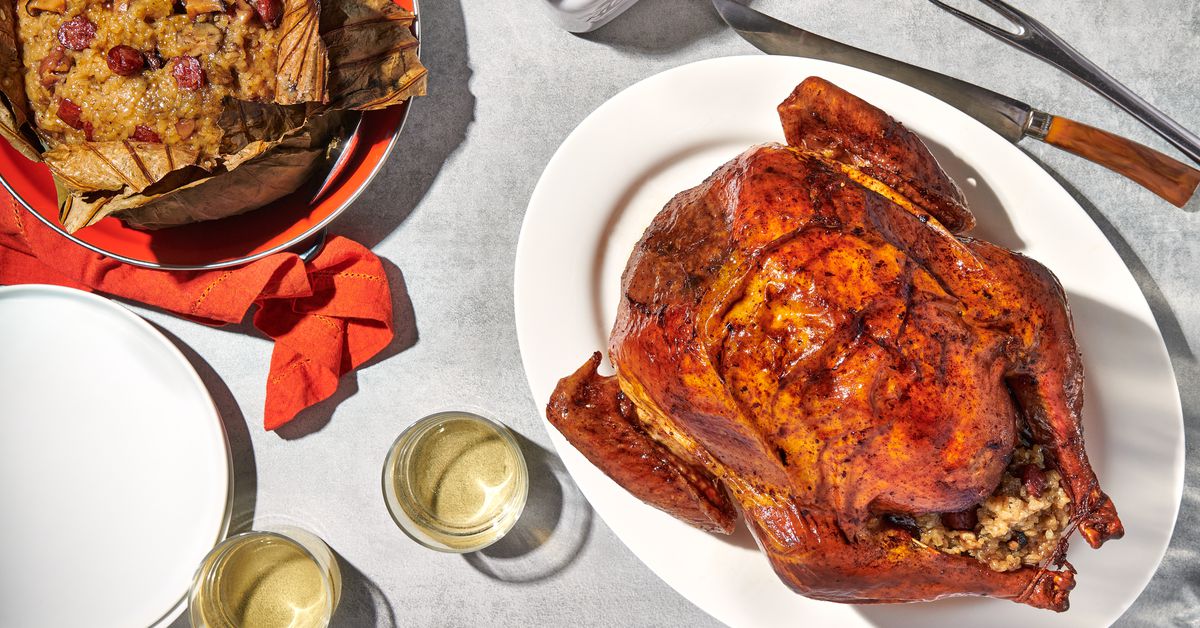 This has been my family’s go-to holiday turkey ever since we moved back from Taiwan in the mid-’80s. I took a clue from China’s many “eight treasure duck” recipes and quickly started relying on a Shanghainese-style baste and Cantonese sticky-rice stuffing to transform this staid American bird into something my extended Chinese family (and, to be honest, every one of my own relatives) adores.

This baste is dead simple, for it’s nothing more than good Chinese soy sauce, Shaoxing rice wine, fresh ginger, and toasted sesame oil. But a strange alchemy then takes over in the oven, as the sugars in the soy sauce bind together with the turkey’s own juices to shellac the bird. You end up with a shiny mahogany lacquer that tastes as good as it looks. You’ll also notice that the skin has a wonderfully lumpy pattern thanks to all the whole garlic cloves jammed underneath it, to both season the meat and dry the skin out into a delectable crunch. (See this recipe for a chicken recipe that uses the same technique.) The aroma as the turkey cooks will make you weak in the knees — and draw every single one of your guests into the kitchen.

Even though bread stuffing is unheard of in China, poultry filled with highly seasoned rice has been a favorite banquet dish in many areas of the country for centuries. I therefore haven’t done anything particularly clever here other than follow in the footsteps of those many great Chinese cooks who think — like me — that too much of a good thing is exactly the right amount. That’s why we have Cantonese charcuterie seasoning the rice here, as well as dried mushrooms and chestnuts.

When it comes to the ingredients, you’ll notice that I specifically call for Chinese soy sauce, which is darker, richer, and thicker than Japanese shoyu or tamari, and definitely worth seeking out. While you’re shopping, hunt down some Shaoxing rice cooking wine, as it is becoming increasingly available in the States. (Both of these ingredients can be found in a well-stocked Chinese grocery, as well as online. Be sure to scroll to the end for a suggested list of substitutes for many of the Chinese ingredients in these two dishes.)

Stuff your bird with as much of the seasoned rice as it will willingly accept, and then steam the rest in large, dried lotus leaves. This not only makes the dish visually impressive, but its subtle fragrance also permeates the rice, adding yet another layer of flavor and aroma. (Truth be told, no matter what you do to that rice in the lotus leaves, the most divine portion will inevitably be found inside the turkey, where the bird’s juices and fats will have had a couple of hours to seep into each little starchy globule. But then again, the same rule for wine applies here for stuffing: Serve the good stuff first and then bring out the rest as folks’ appetites are satiated.)

Unless your table is infested with teenage boys, you should have plenty of leftovers, which means that you’ll still be guaranteed lots of turkey for sandwiches and carcass for soup. My favorite leftover dish, though, is a simple Taiwanese street food: a bowl of hot steamed rice topped with a handful of shredded turkey, some of the bird’s juices or even seasoned broth, and slices of the yellow Japanese radish pickle known as takuan. Simplicity itself, but also a perfectly good reason to squirrel away a good chunk of turkey.

The degreased pan drippings from the turkey

Step 1: First, make the sticky rice stuffing. This dish and its components can be either prepped or cooked a couple of days ahead of time and refrigerated. At least the night before you cook the rice, place the dried mushrooms and chestnuts in two separate bowls. Cover the mushrooms with 1½ cups cool water and the chestnuts with another 1½ cups water. Place the rice in a large work bowl and cover it with about 3 inches | 8cm cool water. Select 2 pretty lotus leaves (unbroken and green); rinse them carefully and place them in a large bowl. Cover with cool water and soak overnight.

Step 2: The next day, drain the dried chestnuts and remove any red skins or damaged areas; break or chop the chestnuts into a more or less ½-inch | 1cm dice. Place the chestnuts in a small saucepan and add the mushroom seasoning or chicken bouillon, add enough water to cover, and then simmer them over medium heat until most of the liquid has evaporated, about 35 minutes. Rinse the soaked rice in a large strainer under running tap water before letting it drip in the sink. Drain the mushrooms over a bowl to reserve the soaking liquid. Strain the liquid and set it aside. Remove the stems from the mushrooms and slice the caps into thin slices. Rinse the lotus leaves again and cover them with a damp towel. Rinse the sausages and peel off the casings if they are loose, then chop the sausages crosswise into ½-inch pieces.

Step 3: Combine the soy sauce, rice wine, oyster sauce, and pepper in a small bowl. Heat the oil in a large wok over medium-high heat until it begins to shimmer. Toss in the shallots, ginger and sausages, and stir-fry them until the fat in the meat turns translucent. Add the mushrooms and chestnuts, and continue to stir-fry these for a few minutes to barely brown the mushrooms. Add the drained raw rice to the wok and continue to stir-fry the rice with all of the savory bits for another couple of minutes so that each rice grain is coated with oil and some even become slightly toasted. Pour the soy sauce mixture over the rice, toss for a few seconds, and then add the strained mushroom-soaking liquid, as well as about 1 cup boiling water. Continue to toss the rice as it cooks, adding more boiling water if needed until the rice is barely al dente — that is, slightly chewy but fully cooked. (Note: The rice and chestnuts will not plump up any further while the stuffing is being steamed, so be sure that they are fully cooked at this point.) Taste and adjust the seasoning as desired, adding more oyster sauce, if you like. Remove the wok from the heat. If you are making this a day ahead, simply cover the cooled rice with plastic wrap and store it in the refrigerator. You’ll have about 16 cups rice stuffing, and will use about 5 to 7 cups to stuff the turkey.

Step 4: Place both lotus leaves with the green side down in a large, shallow, heatproof bowl; center the stem ends in bottom of the bowl, and then gently smoosh the leaves so that they lie relatively flat in the bowl. Mound all of the rice that hasn’t been stuffed into the turkey onto the leaves, and then fold the edges of the leaves over the rice to cover it completely. Place the rice in a steamer and steam it over low heat while you roast the turkey, refilling the steamer with water as needed. If you don’t have a steamer, any large pan or wok with a trivet can be used to steam rice, and a wide steamer pot with an insert will also work.

Step 5: Just before serving, remove the bowl from the steamer and invert it over a round serving platter. Cut a large hole in the top of the leaves and reserve the prettiest one to act as a cap. Bring the defatted drippings to a boil and pour this over the rice. Serve with the cap perched jauntily on the edge of the hole so that guests may serve themselves.

Roast Turkey with Lots of Garlic

Step 1: Start the turkey about 4½ to 5 hours before you wish to serve it. Heat your oven to 350 degrees, and spray a roasting pan and rack with oil. (The bird should sit snugly inside the pan so that it doesn’t dry out.) Remove the giblets and extra fat from the turkey, and then pat the bird dry inside and out with paper towels. Loosen the skin over both sides of the breast and the tops of the thighs by carefully running your fingers under their skin. Bend the wings underneath the body so that they lie flat.

Step 2: Mix together the sesame oil, 2 tablespoons soy sauce, 2 tablespoons rice wine, and grated ginger. Rub about half of this marinade under the skin over the breast and tops of the thighs, as well as inside the turkey’s front and back cavities. Peel the garlic (see sidebar for a great suggestion for how to do that), and stick the whole cloves under the skin wherever you can. Stuff the front and back cavities with as much of the sticky rice mixture as comfortably fits (about 6 to 7 cups) — the rice will swell as it absorbs the turkey’s juices, so don’t cram it in too tightly. Close the skin over the cavities with toothpicks, or thread using a trussing needle. Place the turkey on the rack in the pan either breast-side up (which will give you a browner and prettier bird) or upside-down (which will provide you with moister breast meat), and tuck the giblets in close to the turkey so that they don’t burn (you can serve them with the turkey, or folded into the rice). Put the turkey in the oven and roast without basting for around 30 minutes.

Step 3: Mix the melted butter with any leftover marinade and the rest of the soy sauce and rice wine. Baste the bird every occasionally with both the marinade and the pan juices, paying particular attention to the breast if the turkey is right-side up. If the pan juices begin to burn, just add some water to the bottom of the roasting pan. The skin will eventually take on a lovely walnut sheen. If the turkey is browning faster than you like, place a foil tent over the bird. Roast the bird for about 15 minutes per pound, but check it periodically just to make sure. It is done when the thigh meat is around 165 degrees on an instant-read meat thermometer and the stuffing is 165 degrees. Remove the turkey from the oven and let it rest for about 30 minutes; if you have to wait longer than that, tent the turkey with foil.

Step 4: Drain all of the pan juices into a measuring cup and skim the fat off the top. (The fat can be reserved for something else, and potatoes roasted in this are quite delicious.) Just before serving, place the juices in a small saucepan and bring to a boil over high heat. Pour over the extra rice stuffing that is wrapped in the lotus leaves.

Carolyn Phillips is an artist and food scholar, and the author of At the Chinese Table: A Memoir with Recipes, All Under Heaven, and The Dim Sum Field Guide.
Dina Ávila is a photographer in Portland, Oregon.
Recipe tested and styled by Ivy Manning

The freshest news from the food world every day