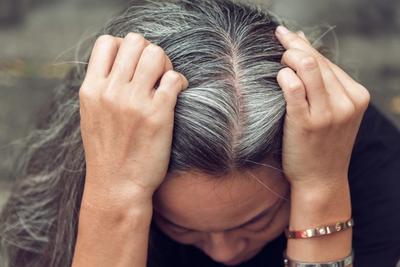 Intrinsic and extrinsic causes of hair aging differ among race and ethnicity.

For example, hair graying with age is universal, but its average age of onset varies with race. The average age of graying in Caucasians is in the mid-30s, for Asian people it is in the late-30s and for Black people, the mid-40s.

There also are different presentations among ethnicities of common hair concerns. A Caucasian patient seeking recommendations on what to do about damaged hair is more likely to experience damage at the distal hair shaft. A Black patient with the same complaint would be more likely to present with damage closer to the hair root.

Understanding these differences and why they occur can lead to more informed, culturally sensitive recommendations for treating and managing hair aging concerns, according to a review of studies published earlier this year in the Journal of Clinical and Aesthetic Dermatology.1

“There is very little published on hair aging in different ethnicities,” she says. “I really wanted to better understand the differences that we visibly see.”

Intrinsic hair aging includes the natural physiological changes that happen with time, according to the authors. “Intrinsic aging is what we are born with,” Vashi says. “It is dependent on the genes that we inherit from our parents, and it is also what we’re made of—our ethnicity and background.”

Hair graying is associated with aging and the decline in melanocytes thought to happen naturally with age. “I have had some patients come in because they felt like they were graying too early,” she says.

Not only is average age of graying onset different among ethnicities, but so is what is considered to be premature graying. “Graying is premature if it occurs at different times in different populations. It is at about age 20 in Caucasians, 25 in Asians, and 30 in African Americans,” Vashi says. “A lot of the differences can be attributed to pigment.”

This is important information to have when managing patient expectations and addressing their concerns, she says.

“If someone is an age where changes such hair loss is premature, then we can be more aggressive possibly in the medications we use and advise them to follow up with us,” she says.

Black people have the lowest growth rate of hair but the highest eumelanin content. Breakage is increased or faster in this hair type. This group also has smaller hair cuticles than other ethnicities.

And while the hair shaft shape in Caucasians is cylindrical, it is ellipsoid or flattened in Black people, circular in Asian and cylindrical and circular in Hispanic populations.

The more manageable and controllable hair aging factors are extrinsic, including environmental exposures and physical stress from grooming practices. “Oxidative damage of the hair that can be caused by ultraviolet light and chemicals can change the quality and quantity of our hair,” Vashi says. “Chemicals, like hair dye or products for hair straightening, can cause damage to the hair fiber. Smoking can increase the rate of hair aging.”

In fact, studies have shown that the risk of hair graying is nearly twice as high in smokers vs nonsmokers, according to the review.

“There is a component of extrinsic aging related to different cultural practices. It’s not just how you were born and your genetics, but also your culture and what you do,” she says.

For example, the findings that Asian and Caucasian people present with more distal hair damage at the hair shaft and Black people with damage closer to the hair root is due not only to the structure of hair but also extrinsic factors, like cultural hair care practices, according to Vashi.

“Patients have come to me who say their hair just stopped growing,” Vashi says. “They think there is something wrong with them. There is nothing wrong with them. The hair is growing but when a break happens it is in a different hair. There is one hair that is growing and another that is breaking. If the breakage is happening faster there is a visible perception that there is no hair growth.”

There are things patients cannot avoid as they age, including graying and hair density decreases. But there are general and culturally specific changes and practices that can prevent premature hair aging. Among those strategies that health care providers can recommend are appropriate grooming habits; careful hair styling; better choices for shampoos, conditioners and leave-in products; better hair coloring choices; and medical therapies to treat underlying conditions, according to the study authors.

“If we can practice better hair styling regimens or if we can advise our patients to, then the aspect of breakage may at least improve,” Vashi says. “Then the perception of hair is that it is longer and growing more.”

Interestingly, cosmetic products to bleach, color, perm, or straighten hair can impact hair types differently. For example, Asian hair tends to be more resistant to straightening treatments than Caucasian and Black hair. Asian hair seems to have larger amounts of integral lipids, fatty acids, cholesterol, and wax esters than other hair, which makes Asian hair less susceptible to UV damage, as well, according to the review.

Hair dyes, in general, can cause allergies and damage hair, according to Vashi.

“There are certain components of hair dyes that can act as allergens,” she says. “I don’t tell patients to stop dying their hair, but I advise on safe procedures and to avoid anything that is causing pain, itching or burning on the scalp. We are only born with so many hair follicles. Once a hair follicle scars down or goes away, that’s it.”

Vashi says she offers patients patch testing to determine which hair dye ingredients might be causing the reaction and gives them an alternative recommendation.

Hair dyes are not the only culprits. Some relaxers or hot hair styling treatments can cause burns that permanently damage the hair follicles.

“Hair is such an important aspect of how people and patients perceive themselves,” Vashi says. “Cross culturally, there are certain aspects of the appearance of hair that are considered to be beautiful. We also have a population that is aging but wants to maintain a youthful, vibrant appearance. A lot of what we can do is to counsel, make hair care recommendations, offer treatments, and set expectations in a culturally sensitive way.”

This article was initially published by our sister publication Aesthetic Authority.