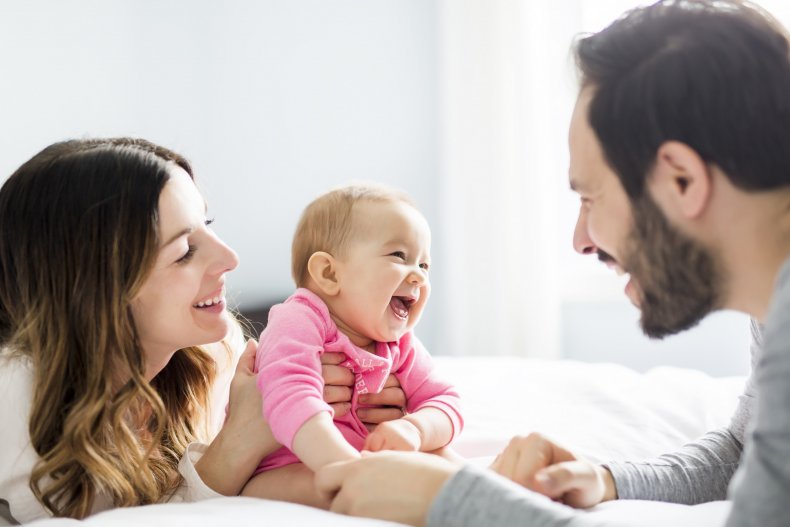 Some of the greatest joys of early parenthood involve watching your baby learn to communicate and express themselves as they grow.

For adults, humour is one of the main ways to connect with others, so it’s natural to wonder when you can share this with your baby.

When do babies begin to laugh? And what is the best way to make them giggle?

When Do Babies Start Laughing?

Speaking to Newsweek, Dr. Stephanie A. Fox—a licensed psychologist and clinical assistant professor at the Carolina Institute for Developmental Disabilities (CIDD) of the University of North Carolina at Chapel Hill—said laughter in babies is “first seen in typical development around four months, with laughter in response to purely social stimuli (not physical stimulation) starting around six to seven months.”

Newborns may smile from as early as the first week of their lives. However, these are considered “reflexive or spontaneous smiles in response to CNS [Central Nervous System] activity” and often occur during sleep.

“Despite this complexity, infants smile (6 weeks) and laugh (3–4 months) early in the first year and long before their first gestures (6–8 months) or spoken words (12 months), suggesting that these universal means of emotional expression are of marked communicative, evolutionary and developmental significance,” the study noted.

“Humorous exchanges between infants and parents may enhance their opportunities to develop a satisfying relationship, an idea that is consistent with research on humor and relationship quality in adulthood,” the study said.

Fox explained: “Physiologically, babies’ laughter and ‘humor’ is a response to a build of tension followed by release, not unlike humor later in development.”

You May Also Like  Restore your digital — and mental — health

At the early stages, when babies laugh, they’re responding to physical stimulation, such as tickling, swinging or blowing raspberries on their bellies.

But as their laughter “becomes more social,” they tend to laugh in response to “predictable, rhythmic and exciting social routines”—sometimes called Sensory Social Routines—with “big moments,” the psychologist said.

For example, babies will laugh when you play with them by saying things like: “Where’s baby? Where’s baby?… Peekaboo!” or “I’m going to get you…Tickle, tickle, tickle!.” This is why social games and songs are so popular for interacting with babies, Fox said.

Some babies require more stimulation, while others may need gentler and calmer approaches to make them laugh, she said.

How To Make Your Infant Giggle

Physical and auditory stimulation, such as a high-pitched voice or “motherese” (baby talk), are ways to make babies laugh at the earliest stages of their lives, according to Fox.

“Later in infancy, Sensory Social Routines, with build up and big moments, tend to elicit laughter,” she said.

Should I Be Worried If My Baby Hasn’t Started Laughing?

If your baby hasn’t started laughing or smiling, the first port of call would be to evaluate the baby’s sensory systems, such as through audiological and vision testing. Parents should consult with the child’s pediatrician, Fox said.

Parents should note the aforementioned expected developmental window is a “window” and not an exact age. This can be “a fairly wide window,” sometime within six to 10 months, Fox explained.

Cat Tamminga, a coordinator at the Minnesota Department of Education, told Newsweek: “When a baby hasn’t yet started laughing when they typically might, there can be many reasons why. We always encourage families or providers to make a referral to early intervention services for support about any worries,” adding that “developmental expectations can be different from community to community, culture to culture, country to country.”

“Professionals specially trained in early development support families in exploring concerns further and making recommendations for next steps. Sometimes this means services for the baby and family,” Tamminga said.