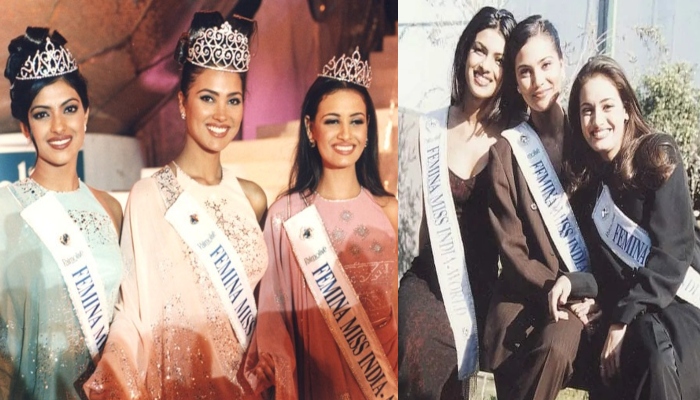 Bollywood actress Dia Mirza is all nostalgic as she shares an iconic, unseen picture from her Miss India 2000 pageant days on her social media handle on Thursday.

The Rehna Hai Tere Dil Mein famed actress took a trip down memory lane as shared a throwback gem on her Instagram. She posted a gorgeous picture from the Miss India pageant in 2000, featuring Priyanka Chopra and Lara Dutta, along with herself.

Sharing the picture, Dia, 40, wrote, “Throwing it back to the year 2000 with @priyankachopra @larabhupathi.”

Reacting to the nostalgic post, the Bell Bottom actress took to the comments section and wrote, “Three girls with a heart full of dreams and each other to lean on!”

In the picture, the beauty icons; Priyanka, Lara and Dia are dressed in colour coordinated black attire as they pose wearing their respective pageant sashes.

Back in 2000, Bollywood divas; Lara was crowned Miss Universe and Priyanka won the Miss World title, while Dia was named Miss Asia Pacific.

After winning the prestigious titles, the all three of them made their successful Bollywood debuts as well.

Back in 2019, the No Entry actress had shared a then-and-now post from the Miss India 2000 pageant and PeeCee and Dia in the post. “I had posted the above picture a while ago but came across this edit on Instagram and really loved it! THEN & NOW! Coming up to 20 years you guys @diamirzaofficial @priyankachopra! I love you both loads. So happy we’ll always have this that ties us together! One for the Motherland!” she had captioned the picture.