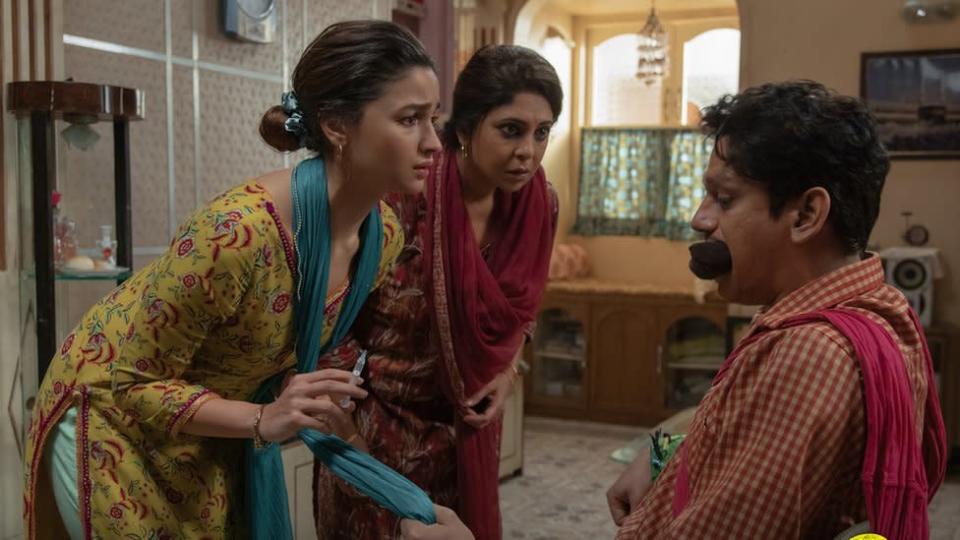 Domestic violence is no laughing matter, but a dark comedy streaming on Netflix on the topic is wowing audiences in India.

Starring Bollywood actress Alia Bhatt, Shefali Shah and Vijay Varma in the lead roles, Darlings is the story of a young Muslim couple in love – and violence and revenge.

The film opens with the lovers – Badrunissa (Bhatt) and Hamza (Varma) – deciding to get married, but theirs is not a happily-ever-after story.

Three years into the marriage, the couple have made a home in a lower middle-class housing tenement, but Badrunissa is sleeping with the enemy.

He’s the classic abuser, who batters her every night and says sorry in the morning. His justification for hitting – and her acceptance of it – is love. “Yes I’m a bastard but I hit you only because I love you,” he says.

And she is a victim who lives in denial, believing that he’ll come around if only she can make him stop drinking or if she has a child to cement their relationship.

But when the savagery continues and he finally crosses a line, rage takes over and halfway through the film, the tables are turned – the abused, with a lot of help from her mother Shamshunissa (played by Shefali Shah), becomes the abuser.

The mother and daughter kidnap the husband, hold him hostage in his own home and start doing to him what he had done to her.

Director Jasmeet K Reen, who co-wrote the script along with actor Parveez Sheikh, told the BBC that the story came to her as a one-line idea, born out of mother-daughter banter.

“My idea was about a mother-daughter duo who have dreams, but there is something wrong – the daughter’s marriage is off. So, they come up with whacky ideas about fixing her marriage.”

The mother is “cynical” and knows from experience that her son-in-law will not change and she doesn’t want her daughter to suffer the same fate that she did. She advises the daughter to leave him – or even kill him.

“But it’s the daughter’s journey – as she travels from tolerance to contemplating revenge to wisdom where she walks away from violence,” Ms Reen says.

The film, which began streaming on Netflix globally exactly a week ago, has received mostly positive reviews from critics and wowed audiences.

According to Netflix, it is doing very well not just in India but in many other countries too.

Darlings has had “the highest global opening ever for a non-English Indian film” and audiences have spent “more than 10 million hours” watching it in its opening weekend, the streaming platform said in a statement to the BBC.

The film “is currently trending in the top 10 in 16 countries in the Americas, Africa and Asia including in the UAE, Singapore, Malaysia, Kenya and Trinidad and Tobago”, it added.

The reasons for interest in the film are not difficult to gauge – Bhatt is among the top Bollywood actress of the day with a dedicated fan following; the film is backed by superstar Shah Rukh Khan’s production company; and the universal appeal of the topic of domestic violence.

According to the World Health Organization, one in three women globally face gender-based violence, most of it inflicted by intimate partners. The numbers for India are similar with domestic violence consistently being the most reported violent crime against women year after year.

In 2020 – the latest year for which official crime data is available – police received complaints from 112,292 women, which breaks down to about one every five minutes. But survivors here also have to battle with the culture of silence and even an overwhelming approval for such violence.

According to a recent government survey, more than 40% of women and 38% of men said it was ok for a man to beat his wife if she disrespected her in-laws, neglected her home or children, went out without telling him, refused sex or didn’t cook properly.

That’s why, when Hamza beats up his wife on the smallest of pretexts, the neighbours in their congested tenement housing society turn a deaf ear to her cries.

Ms Reen says while researching for the film, she found that “most families are okay with domestic violence, people learn to live with it”.

“I spoke to a lot of women, survivors, married women who would crib and cry, who knew that they were being manipulated, but they lived on in hope that the man would reform. People act only when they – or someone they love – gets affected personally.”

Before its release last week, Darlings had found itself in the midst of a controversy with men’s rights activists accusing the film of promoting violence against men and describing Bhatt as “the Indian Amber Heard” – a reference to the Hollywood actress who recently lost her domestic violence case against her ex-husband Johnny Depp.

Save Indian Family Foundation, a men’s rights group, tweeted that “thousands of male victims of domestic violence were traumatised after watching the trailer” and called for a boycott of Alia Bhatt and her films.

“Domestic violence is not a gender thing, it happens to men too. It’s a very serious issue and we have looked at it with sensitivity and with empathy,” she told the BBC.

“We know that violence is not the answer and we are not promoting violence against any gender. In fact, the message of the film is anti-violence and if you’ve seen the film, you’d know it. If you’ve not seen the film and criticise it, then what can I say?”

Many among the audiences also took to social media to support the film. Some said they had enjoyed watching it and were moved by it; survivors wrote that they felt empowered after watching it and some pointed out that in a patriarchal society like India, it was mostly women who faced domestic violence.

“Darlings is not against men but it’s about the naturalisation of the casual sexism and silence against the perpetuated patriarchy in society,” wrote Deep Jaiswal.

“We focus so much on the safety of women on streets but forget to acknowledge that the home & circle of trust is sometimes more dangerous,” he added.

Ms Reen says she’s happy with the response the film has generated.

“A film is made to entertain and engage, but I believe all art should say something, and our film speaks to people about an issue that is very sensitive.

“What we wanted to do was to start a conversation. Our characters represent and mirror society, and we wanted the film to be a conversation starter about domestic violence and I think we have succeeded in doing that.”

You May Also Like  EXCLUSIVE: Alaya F reveals the name of the song that is stuck in her head : Bollywood News - Bollywood Hungama