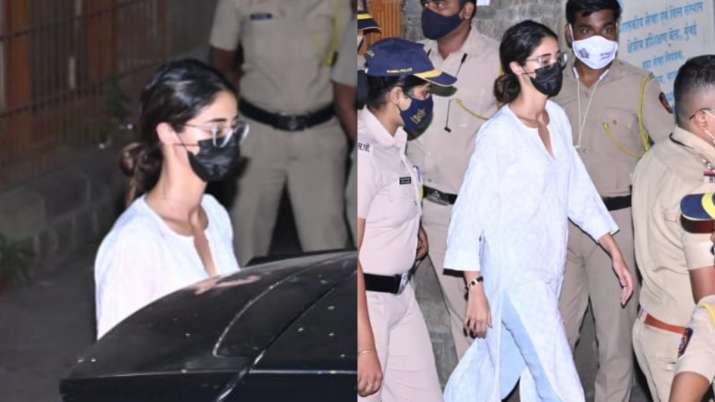 Bollywood actress Ananya Panday left the Narcotics Control Bureau office on Friday (October 22) evening after being questioned for three and half hours in the ongoing cruise drugs case. The actress along with her father Chunky Panday arrived at the NCB office for questioning today afternoon. The agency has once again called Ananya Panday for questioning on Monday, 25th October. She was summoned by the probe agency on Thursday. During the questioning, she denied the allegations of supplying and consuming drugs.

The actress’ mobile phone and laptop were seized by the NCB officials, however, the investigating agency is yet to clarify her role in the case. As per the NCB sources, Ananya denied the allegation of supplying drugs to Aryan Khan, who is accused in the case, and said that she has never consumed drugs. Aryan Khan Drugs Case LIVE Updates: Ananya Panday leaves NCB office, to appear again for questioning on Oct 25

“The chats recovered from Aryan Khan’s mobile phone reveal that in the year 2018-19, she helped supply drugs to Aryan thrice by providing him the numbers of drug dealers,” NCB sources told ANI.

You May Also Like  As wedding season storms Bollywood, Rakul Preet Singh says, 'I believe in institute of marriage' | EXCLUSIVE

“Ananya denied the supply related talks in the chat conversation and told the NCB officials that she has never consumed or supplied drugs,” sources added. Ananya Panday was summoned by the NCB in connection with the Mumbai cruise raid case as well on suspicion of drug consumption. The summon has been issued based on the chats recovered from Aryan Khan’s mobile. No drug chats between Aryan Khan-Ananya Panday: NCB sources

Meanwhile, Aryan Khan’s bail plea was rejected by a special court this week in addition to extending his judicial custody till October 30. The star kid, along with Arbaaz Merchantt and Munmun Dhamecha has moved Bombay High Court for bail and their pleas will be heard on October 26.