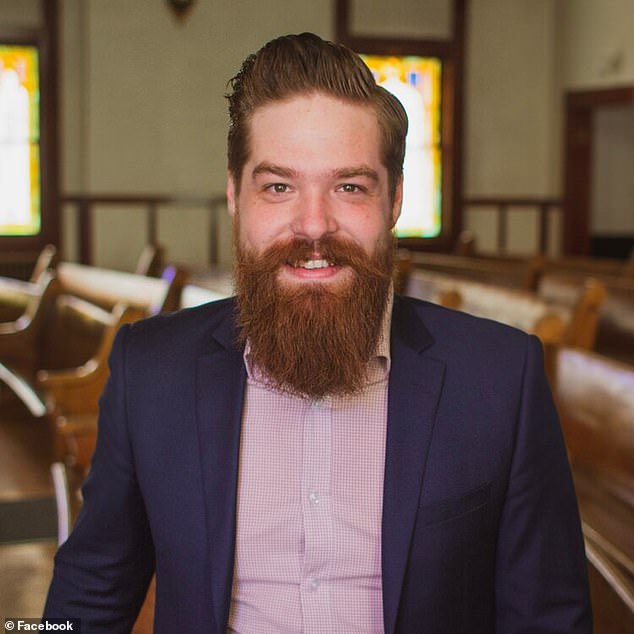 A Christian pastor has sparked outrage online after claiming women should never share photos of themselves wearing certain types of clothing, including swimsuits and bras.

Brian Sauvé, who works at Refuge Church in Ogden, Utah, has been branded a ‘misogynist’ and a ‘sexist’—among other things—in response to his tweet offering women unsolicited advice about their clothing choices in their social media posts.

‘Dear Ladies, There is no reason whatsoever for you to post pictures of yourself in low-cut shirts, bikinis, bra and underwear, or anything similar—ever,’ Sauvé, 31, wrote on Monday. 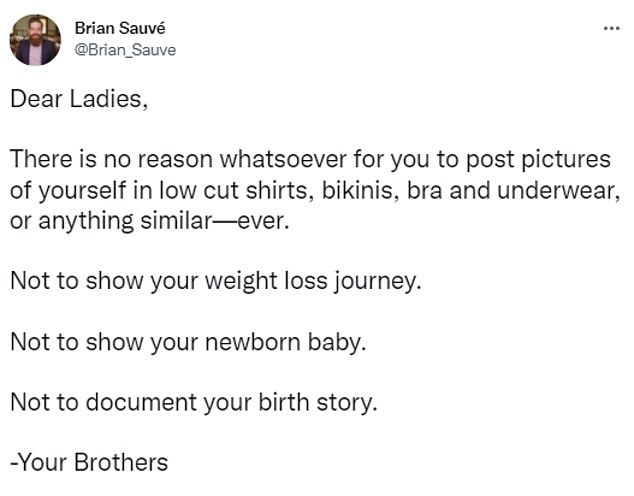 In his tweet, he claimed women should never share pictures of themselves wearing ‘low-cut shirts, bikinis, bra and underwear, or anything similar’ 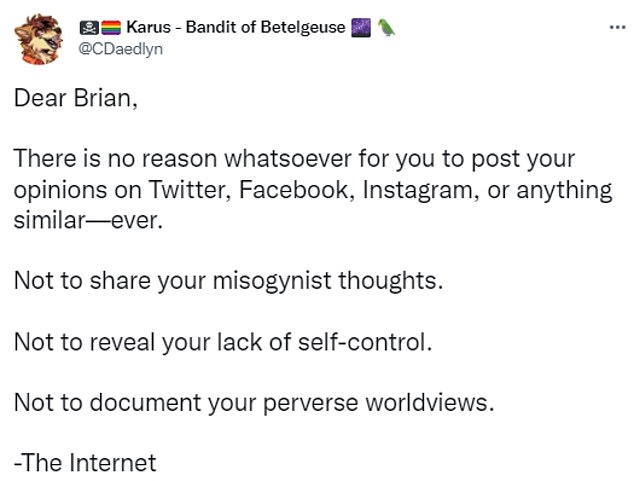 The backlash was swift and critics didn’t mince words as they called out the father of five for his subjugation of women.

In just a few days, Sauvé’s post has earned more than 17,000 retweets and nearly 18,000 comments, many of which came from furious critics.

Another man commented: ‘Dear Brian, There is no reason to be a sexist, misogynistic a**hole, unless you’re threatened by strong, amazing, powerful women who love their bodies or are learning to love their bodies. Do mind your business and shut up.’

‘Dear Brian, Pastors like you are why the Church is known for misogyny and the subjugation of women more than empathy and equity. You should try the sacred ministry of minding your own damn business,’ author John Pavlovitz suggested. 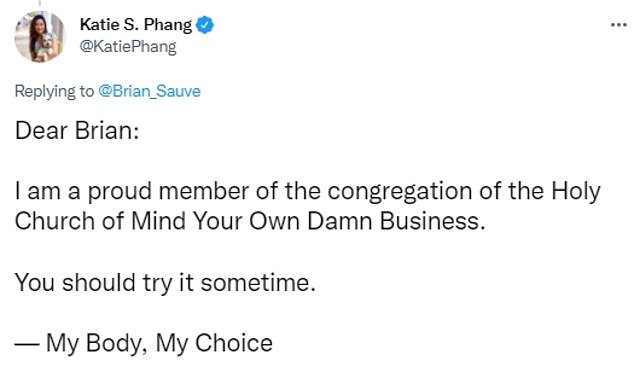 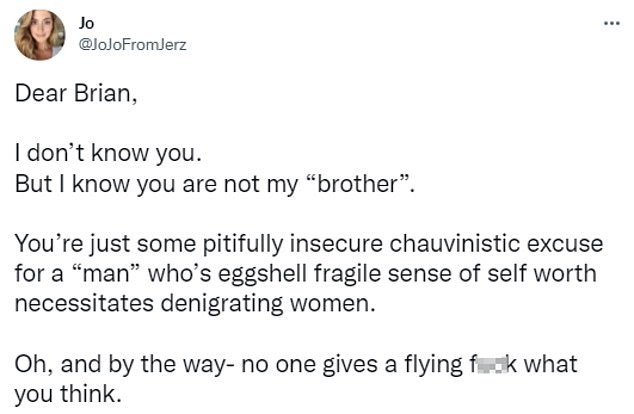 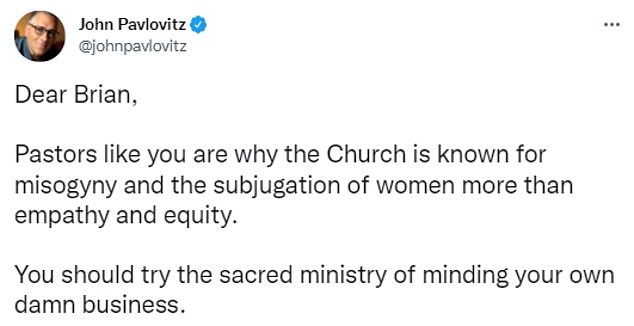 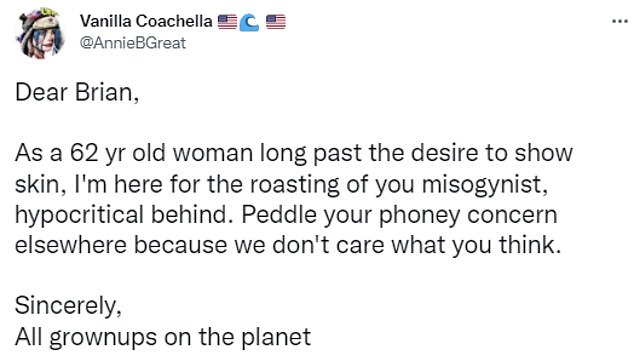 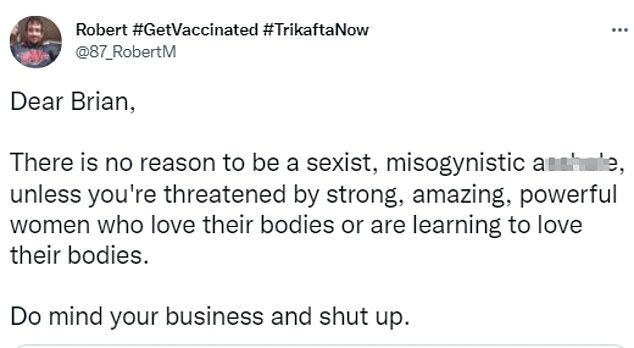 And MSNBC contributor Katie Phang added: ‘I am a proud member of the congregation of the Holy Church of Mind Your Own Damn Business. You should try it sometime. — My Body, My Choice.’

In a follow-up tweet, Sauvé griped about the ‘absolute tsunami of sexual temptation’ his ‘Christian brothers’ have to face every day.

‘Brothers, you have no choice but to live in a world where even some of your professed Christian sisters parade their bottoms and breasts in front of you,’ he wrote.

Critics were quick to argue that women shouldn’t be blamed for his—or other men’s—lack of self-control.

‘Dear Brian, There is no reason whatsoever for you to post your opinions on Twitter, Facebook, Instagram, or anything similar—ever. Not to share your misogynist thoughts. Not to reveal your lack of self-control. Not to document your perverse worldviews. -The Internet,’ one person tweeted. 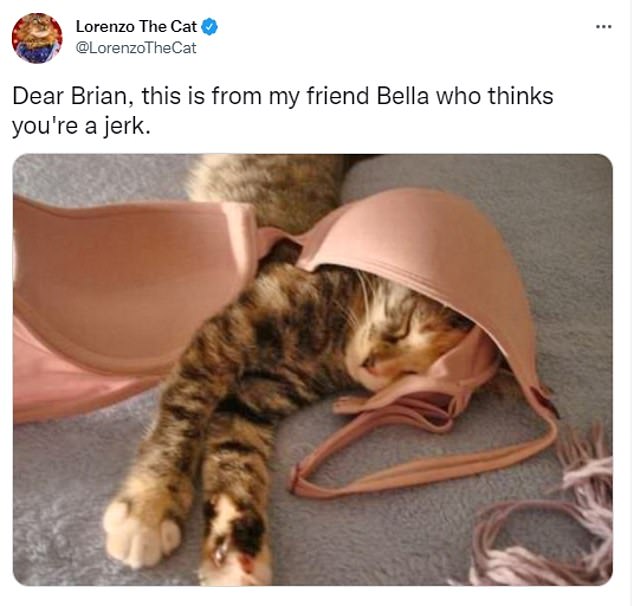 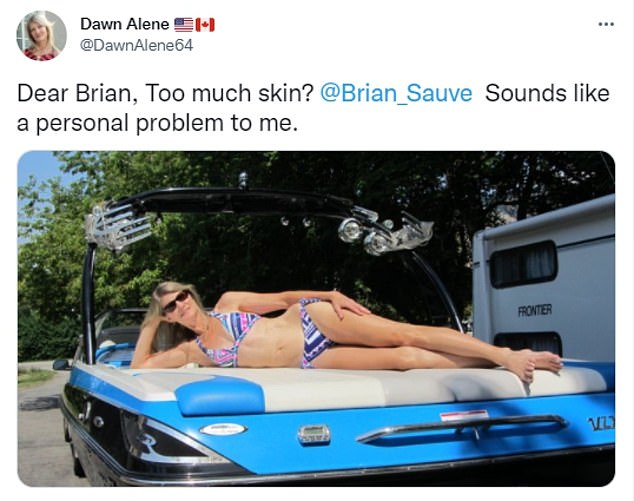 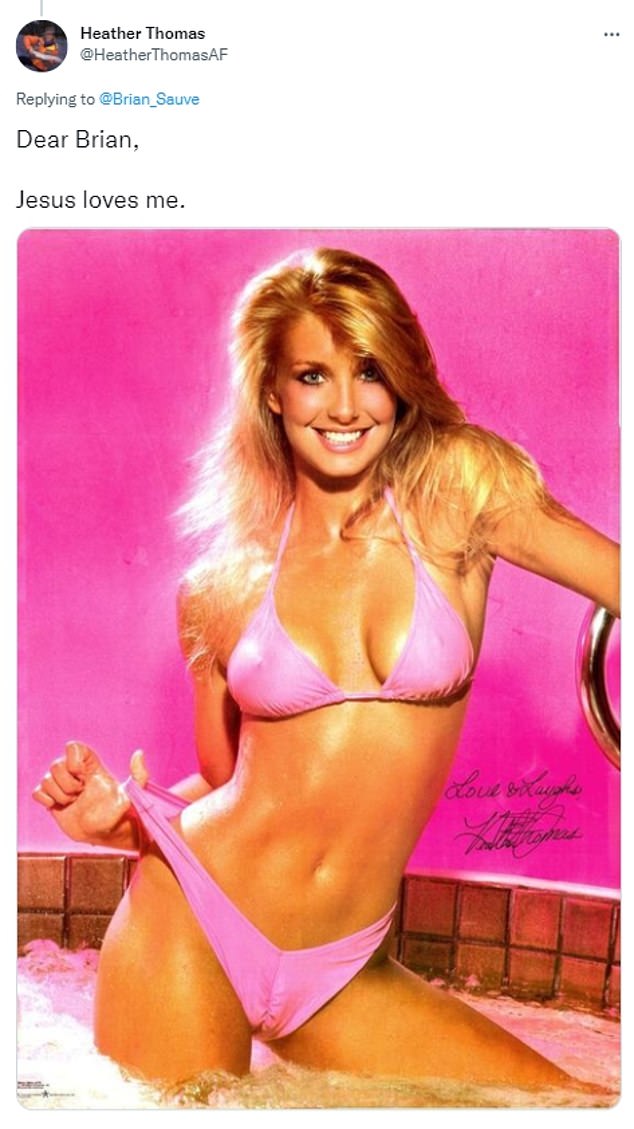 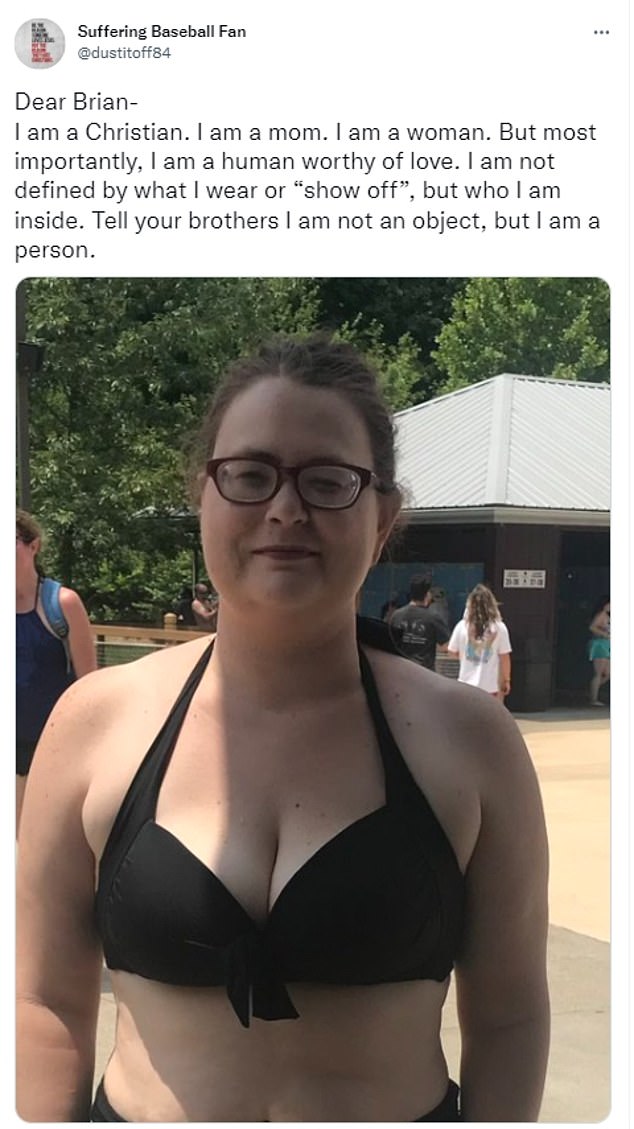 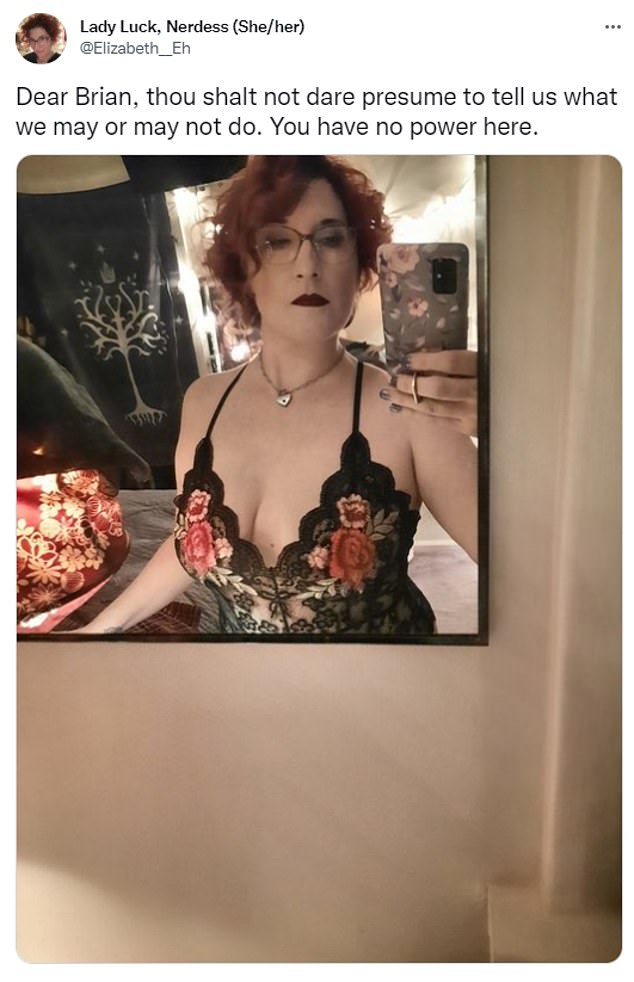 Some women also shared photos of themselves proudly wearing low-cut tops, bikinis, and lingerie in response

You May Also Like  ‘Market is like a woman...,’ when Jhunjhunwala gave stock tips to Kareena Kapoor

‘The real problem with Dear Brian is that he’s a pastor and Sunday school teacher,’ someone else pointed out. ‘Brian is teaching little girls that they are responsible for men’s “impure” thoughts about them and he’s doing it as a tax exempt religious organization.’

Other women hit back at Sauvé by proudly sharing photos of themselves wearing low-cut tops, bikinis, and lingerie.

‘Dear Brian, thou shalt not dare presume to tell us what we may or may not do. You have no power here,’ one Twitter user wrote.

‘Dear Brian, Too much skin? ⁦@Brian_Sauve ⁩Sounds like a personal problem to me,’ someone else,’ another woman captioned a bikini snapshot.

Sauvé continued to defend himself on Tuesday in a lengthy Twitter thread addressed to ‘liberal feminists,’ though he received plenty of backlash from men as well. 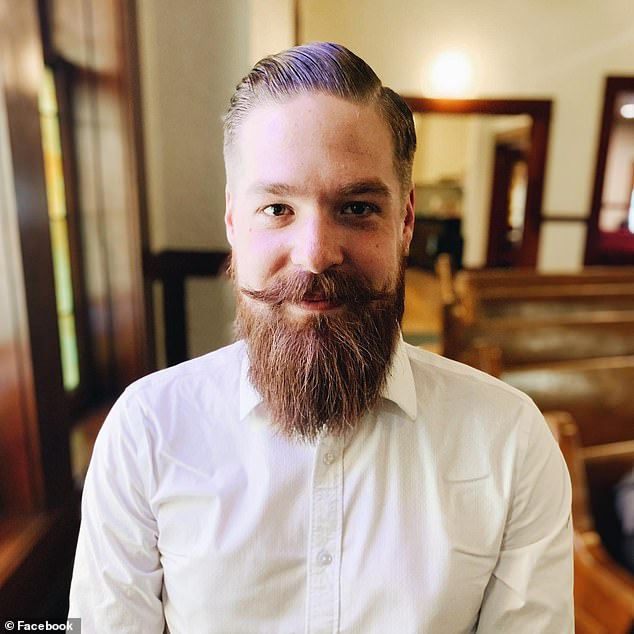 Sauvé defended himself on Tuesday in a lengthy Twitter thread addressed to ‘liberal feminists,’ though he received plenty of backlash from men as well

Sauvé claimed the women who were sending him pictures without his consent were ‘hypocrites,’ but he insisted he doesn’t ‘hate’ them

‘Quite a few men and women who would likely identify as liberal feminists have recently taken quite the interest in my Twitter account,’ he tweeted. ‘Welcome! I’m glad you’re here.’

He went on to question his female critic’s ‘sexual ethics’ and accuse them of ‘hypocrisy.’

‘Many of you likely use and promote the #MeToo movement—yet hundreds of you are sending me unsolicited sexual images and videos. Is that ok now?’ he asked. ‘I thought your sexual ethic was all about consent? This seems like naked (pun intended) hypocrisy on your part.’

‘If a man were to send you unsolicited nude pictures or sexually explicit videos of himself, you would (rightly!) judge him as a sexually abusive pervert,’ he added. ‘But you can do it to me? How does the ethical math work out on that? Maybe your sexual ethics aren’t so ethical after all.’

Sauvé noted that ‘we’re all hypocrites, sinners, and moral vagabonds’ before telling his critics that they would be in his prayers.

‘I don’t hate you. Sincerely, I don’t,’ he wrote. ‘I hope that you can find freedom from the crippling weight of your sin through Christ.’ 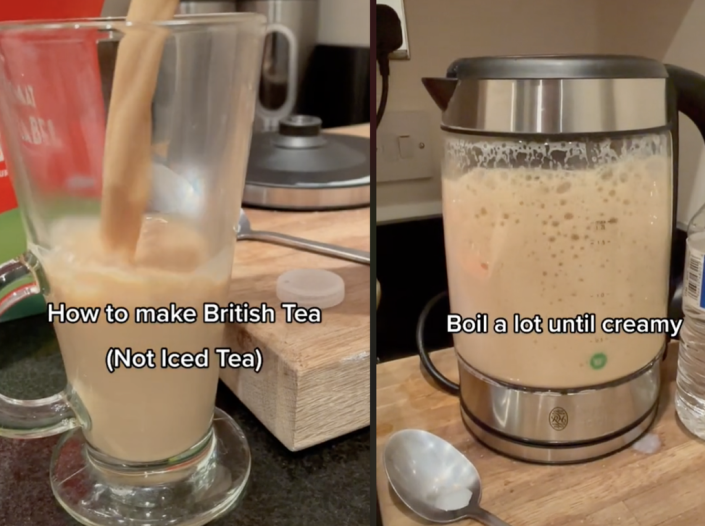