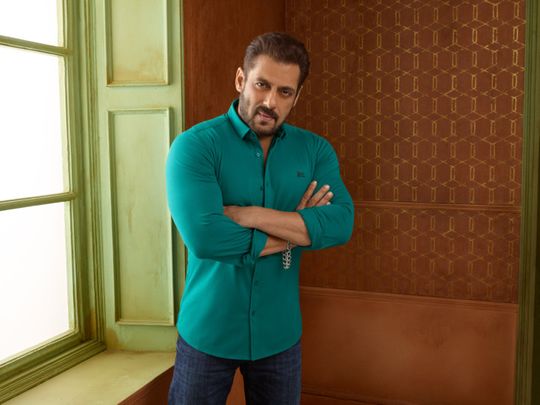 Bollywood superstar Salman Khan is acutely aware that working with his brother-in-law Aayush Sharma in his production ‘Antim: The Final Truth’ will reek of nepotism and unfair advantage. But the A-lister, with immense clout in the film industry, discredits those accusations by claiming that he wasn’t keen to hire him either.

“I was not the one to even recommend him. In fact, I was against that decision … But he surprised us all,” said Khan in an audio Zoom call with Gulf News.

In director Mahesh Manjrekar’s action thriller ‘Antim: The Final Truth’, releasing in the UAE on November 25, Khan plays an upright Sikh cop who is on a mission to flush out unscrupulous gangster Rahuliya, played by a baby-faced Sharma.

The unusual casting choice, in which Sharma is on call to look menacing and vitriolic, has understandably polarised Bollywood movie fans who cynically wonder out aloud if the one-film-old Sharma has earned enough street credit to play such a demanding role. But Khan, 55, lets us in on a secret.

“Initially, it [the film] was only about me doing my cop character and there was another actor doing this other character. Ayush didn’t look like Rahuliya three months before starting this film, but I saw his growth in the last one and a half months and his dedication was stupendous … Trust me, he was not taken in this film because he is my brother-in-law, but because he is an actor who showed us that he suited that part,” said the veteran actor.

Khan is also the producer of this film, but he says that it was director Manjrekar who convinced him to take Sharma on board.

“The director believed that he could extract what he wanted from Ayush … Honestly, my brother-in-law doesn’t look or behave like Rahuliya. He’s a soft-spoken, humble boy. But when I saw him playing this character, we knew we had made the right choice. And, we didn’t face any date problems with him,” said Khan with a laugh.

Khan also points out that he’s under no compulsion to cast his brothers [actors Arbaaz and Sohail Khan], his relatives, or his friends in his own productions.

“I see them at home, I don’t need them on screen too,” pointed out Khan in his trademark sarcastic manner.

While Sharma’s inclusion in the film has raised many an eyebrow, Khan doesn’t face any such snubs. The ‘Dabangg’ actor, who was loved for his role as a cheeky and irreverent cop Chulbul Pandey in the hit film franchise, is right up his street in ‘Antim’. The bankable actor and blockbuster magnet is known for playing lion-hearted and virtuous roles. His army of fans are always overjoyed when he plays an indestructible force of nature.

“But this character is totally different from Chulbul Pandey and any other character that I have played so far in my career. I played a Sikh cop long time ago in ‘Heroes’ and it was just a cameo … My character in ‘Antim’ is noble. He has scruples, ethics, and morals,” said Khan.

The turban-wearing cop isn’t impulsive and is calm even when he gets humiliated and focuses on doing the right thing in life. “He’s the kind of guy who fights all odds and cleans up the mess,” said Khan.

While his personal life may be checkered with his several brush-ins with the law [he faced a long legal battle for reportedly killing an endangered animal and was also accused in 2002 of causing the death of one person in a hit-and-run in Mumbai], his one-screen persona in mostly family entertainers with songs, dance, action,and drama does not reflect any grim shades.

His career-defining roles — be it playing a committed lover in ‘Maine Pyar Kiya’ or a golden-hearted nationalist in ‘Bajrangi Bhaijaan’ — are invariably unblemished, cheerful, and wholesome.

You May Also Like  Sonam Kapoor Stuns In A Pink Pleated Dress For Baby Shower, Radiates Glow As She Flaunts Her Bump

But of late, his sheen and star power seems to have slightly worn off. His last release in May this year, ‘Radhe: Your Most Wanted Bhai’, didn’t curry any flavour with critics, but managed a respectable earning when it released directly on web streaming platforms in India and in cinemas in the UAE. According to Forbes, the combined collection of ‘Radhe’, both from box office earnings from cinemas as well as pay-per-view model, was pegged at more than Rs2 billion. The hybrid release model was taken out in duress due to the multiple lockdowns triggered by the global COVID-19 pandemic, says Khan.

“If I didn’t take that step, we knew there will be no jobs or no salaries. It was so difficult for people to survive during that … It was lockdown after lockdown. So I thought why not with Rs250 your whole family could sit together and watch a film for almost free … But it didn’t have the same impact at all like you see it in the big screen,” observed Khan. But he doesn’t blame anyone for that misstep and misadventure.

“When I saw ‘Radhe …’ myself on a large television screen, I didn’t get that same impact because that film at its core had some amazing action sequences. They just didn’t look like the way we imagined,” said Khan. Piracy also didn’t help at that point, according to the actor.

With ‘Antim’, Khan and his team have made a conscious decision to release it solely in the cinemas worldwide. But it wasn’t just Khan who battled a lot of uncertainty. During the making of ‘Antim’, director Manjrekar was diagnosed with urinary bladder cancer.

“He never showed any fear. He completed the whole film’s shooting and after that went in for his surgery. He’s so strong and he was like a rock … so brave. He’s a true hero,” said Khan.

Manjrekar has emerged cancer-free now. And, now the whole focus is on rolling out their labour of love.

‘Antim: The Final Truth’ is culled from Pravin Tarde’s Marati film ‘Mulshi Pattern’ (2018). But Khan claims the plot may be similar, but the characters and the story have been dramatically altered. Even the scale is different, points out the actor.

“That was made on a small budget, but this film is made on a big budget in terms of actions, songs, proper climax, sets and everything,” said Khan.

But it isn’t the budget or the scale that’s rocking his boat right now. Khan is undertandably ecstatic that Bollywood cinema is limping back to normalcy. Due to the closure of cinemas in India for nearly two years, the entertainment industry has naturally taken a heavy beating. In the last two months after the cinemas in Maharashtra — a key market for Bollywood — re-opened, big budget films such as Akshay Kumar’s ‘Sooryavanshi’ and Rani Mukerji’s ‘Bunty Aur Babli 2’ have dipped their toes into the pool of theatrical releases. But none of it has been easy as Khan describes that challenging phase as an inordinately tough time.

“It has been difficult for everyone, no matter what position they are in. Very few people made money and those did made a lot of money … But apart from that, it has just been really bad,” said Khan.

Apparently, during a late-night drive he spotted a dark cinema hall in his city and that vision gutted him.

‘Antim: The Final Truth’ is out in the UAE cinemas on November 25