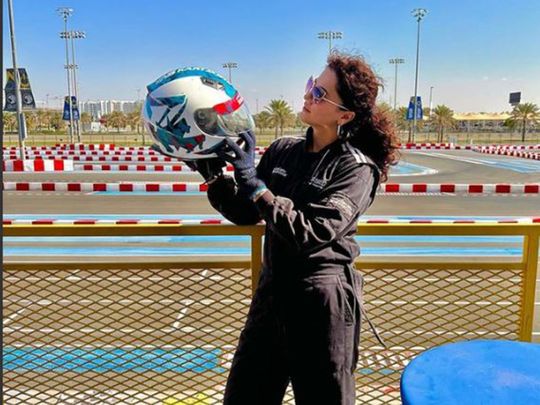 Taapse Pannu is giving throttle to her adrenaline junkie side as the Bollywood star got behind the wheel of a race car to take a spin around the Yas Marina Circuit in Abu Dhabi.

The actress posted an image from her adventure on her Instagram, along with sharing a few pictures on her stories as well.

“Will need that protection for the pace at which this holiday is progressing. Ready to hit the race track…..@visitabudhabi @ymcofficial #TheTimeIsNow #InAbuDhabi,” posted Pannu, along with a picture of her in overalls while checking out her helmet.

The actress was joined on the circuit by her sister Shagun Pannu, who apparently beat her famous sister on the race track by four whole seconds.

Pannu’s adventure in Abu Dhabi was not limited to Yas Island. In a series of images, the actress was also spotted on the grounds of the Grand Mosque in the UAE capital, which was followed by a visit and a possible overnight stay at the Arabian Nights Village.

While her adventure appeared to have a tie-in with Abu Dhabi tourism, she isn’t the first Bollywood celebrity to embark on an exploration of the emirate. In November, a little over a month away from his December 9 wedding to Katrina Kaif, Bollywood actor Vicky Kaushal was also spotted setting off on a joyride into the Rub Al Khali.

You May Also Like  ‘The Bachelor’ Alum Hannah Godwin is a Swimsuit Stunner! Her Best Bikini Photos

Going by the images shared by Kaushal, the actor hopped aboard an aircraft to get an aerial view of the city, along with the sprawling Emirates Palace hotel complex and the Fairmont Marina Abu Dhabi. But what really caught our attention were pictures of Kaushal behind the wheel of a Rolls-Royce convertible that suspiciously looks like the Dawn. With the caption, “New place. New experiences!,” Kaushal sets off into the Rub Al Khali to the beats of Cheb Khaled’s ‘Didi’.

Similarly, in August, Hollywood actor and comedian Kevin Hart promoted Yas Island through his social media talking about heading to the UAE capital “soon” where he plans on riding on the world’s faster rollercoaster, zipping on the Grand Prix race track and teeing off in between.

In the case of the Pannu sisters, it is unclear whether they are planning to ring in the New Year in Abu Dhabi or jet off to a new adventure.