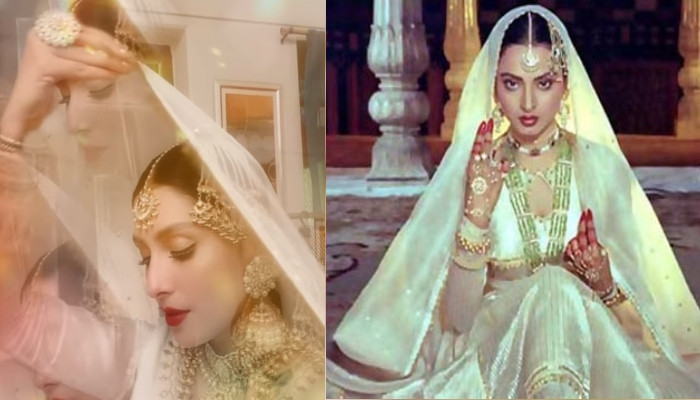 The Mehar Posh starlet took to her Instagram handle and posted her video wherein she can be seen posing on the iconic lines of Rekha’s hit song Salam-e-Ishq.

The Merey Paas Tum Ho diva, who is the most followed Pakistani celebrity on Instagram with more than 10 million followers, created the recent look for her current drama serial Laapata. She captioned the video, “Salam e ishq! #geetiprincess #geetikishadi”

Khan also shared a bunch of snaps on her account. In the pictures, the Chupke Chupke actress can be seen wearing a traditional white and gold embroidered ensemble with elegant heavy jewelry and subtle makeup.

Khan is currently winning praise and popularity for her acting in drama serial Laapata. She has created various iconic looks as her role in the serial is to play a TikTok influencer. The drama also star Ali Rehman Khan and Sarah Khan.