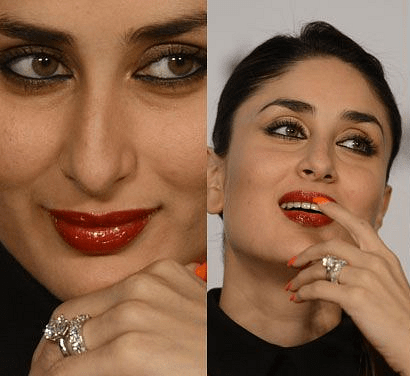 Wedding Rings Worn by Bollywood Actresses: Bollywood celebs are known for their lavish and quintessential lifestyle. From expensive houses to cars to jewellery, these actors have everything bling and never shy away from flaunting them. These celebs are always on their A-game and can be seen showering millions on designer clothes jewels. We have curated a list of the blingiest engagement rings. However, we do not know the authenticity or the veracity of these reports.Also Read – Deepika Padukone on Performing Intimate Scenes in Gehraiyaan: Not Doing For Eyeballs

Check Out The Most Expensive Wedding Rings Here

Katrina Kaif married her beau Vicky Kaushal. They both were dressed in Sabyasachi’s attires. Katrina’s ring belonged from Tiffany & Co. The ring was cushion-cut tanzanite with a double row of sparkling diamonds. It cost about USD 9800 or Rs 7,41,203 approximately.

Priyanka Chopra and Nick Jonas’ wedding was legit a mixture and blending of two different cultures. According to E!, Nick chose Tiffany & Co store’s beautiful ring for Priyanka Chopra worth $200,000 (approximately Rs 1,40,35,000). He said,” Priyanka’s ring is a high-quality cushion cut weighing around 4 carats. It looks to be somewhere around a G color, VS1 clarity which, from Tiffany & Co, would have a value of around $200,000.”

Shilpa Shetty married Raj Kundra in November 2009. She wore a 20-carat ring worth Rs 3 crore. On the big day, Shilpa happily carried the ring with grace.

Deepika Padukone and Ranveer Singh had a dream like wedding ceremony at Lake Como, Italy. They married in Konkani-style wedding rituals in November 2018. In the wedding pictures, the actress happily flashed her wedding ring that costed between Rs 1.3 – Rs 2.7 crore.

Asin married Rahul Sharma in January 2016. According to the reports, Rahul proposed Asin with a 20-carat solitaire ring that costed more than Rs 6 crore.

Aishwarya Rai married Abhishek Bachchan in 2007 with grandeur and fervour. On numerous occasions, Ash has been seen flaunting her wedding ring. The ring featured a 53-carat solitaire and costed Rs 50 lakh.

In May 2018, Sonam Kapoor married Anand Ahuja. Their wedding was a grand event. Sonam’s engagement ring costed around Rs 90 lakh and the actress has been seen flaunting on numerous occasions like Cannes Film Festival and Vogue photoshoot.

You May Also Like  Watch: Kartik-Kiara on Bhool Bhulaiyaa 2 Success, Akshay Kumar And More | Exclusive